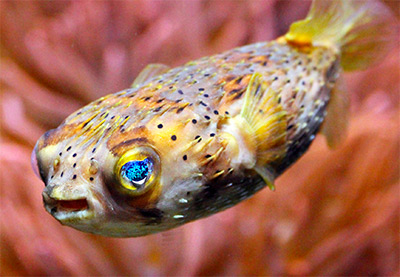 Porcupine pufferfish (Diodon holocanthus)Circumtropical in distribution and ascribed more common names than one can possibly keep straight (spiny puffer, porcupine puffer, porcupinefish, longspined porcupinefish, and balloon porcupinefish, to list but a few), Diodon holocanthus can be a worthy, very pet-like aquarium candidate. This species does, however, have certain non-negotiable needs to be met if it is to live a long, healthy life in captivity. Physical traitsD. holocanthus has a robust, vaguely (American-style) football-shaped body with prominent, bulbous eyes and numerous elongated spines covering its body. These spines normally lie flat against the fish, but when threatened or harassed, it can swallow water or air, causing its body to inflate to nearly twice its size and its spines to stand erect (thus resembling what everyone else in the world calls a football with spikes all over it). The teeth are fused together to form a beak-like structure. Not the most colorful fish in the sea, D. holocanthus typically has a creamy to light-brown base color with dark-brown mottling and spots. MORE