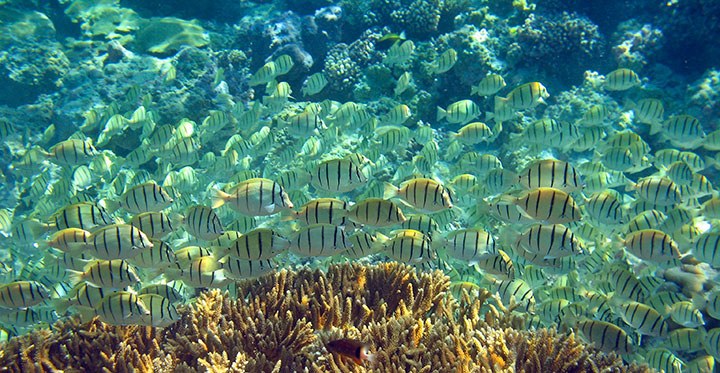 
If history’s closest analog is any indication, the look of the oceans will change drastically in the future as the coming greenhouse world alters marine food webs and gives certain species advantages over others.

Scripps Institution of Oceanography, UC San Diego, paleobiologist Richard Norris and colleagues show that the ancient greenhouse world had few large reefs, a poorly oxygenated ocean, tropical surface waters like a hot tub, and food webs that did not sustain the abundance of large sharks, whales, seabirds, and seals of the modern ocean. Aspects of this greenhouse ocean could reappear in the future if greenhouse gases continue to rise at current accelerating rates.

The researchers base their projections on what is known about the “greenhouse world” of 50 million years ago when levels of greenhouse gases in the atmosphere were much higher than those that have been present during human history. Their review article appears in an Aug. 2 special edition of the journal Science titled “Natural Systems in Changing Climates.”

For the past million years, atmospheric CO2 concentrations have never exceeded 280 parts per million, but industrialization, forest clearing, agriculture, and other human activities have rapidly increased concentrations of CO2 and other gases known to create a “greenhouse” effect that traps heat in the atmosphere. For several days in May 2013, CO2 levels exceeded 400 parts per million for the first time in human history and that milestone could be left well behind in the next decades. At its current pace, Earth could recreate the CO2 content of the atmosphere in the greenhouse world in just 80 years.

In the greenhouse world, fossils indicate that CO2 concentrations reached 800-1,000 parts per million. Tropical ocean temperatures reached 35º C (95º F), and the polar oceans reached 12°C (53°F) — similar to current ocean temperatures offshore San Francisco. There were no polar ice sheets. Scientists have identified a “reef gap” between 42 and 57 million years ago in which complex coral reefs largely disappeared and the seabed was dominated by piles of pebble-like single-celled organisms called foraminifera.

“The ‘rainforests-of-the-sea’ reefs were replaced by the ‘gravel parking lots’ of the greenhouse world,” said Norris.

“The tiny algae of the greenhouse world were just too small to support big animals,” said Norris. “It’s like trying to keep lions happy on mice instead of antelope; lions can’t get by on only tiny snacks.”

Within the greenhouse world, there were rapid warming events that resemble our projected future. One well-studied event is known as the Paleocene-Eocene Thermal Maximum (PETM) 56 million years ago, which serves as a guide to predicting what may happen under current climate trends.

That event lasted about 200,000 years and warmed Earth by 5-9° C (9-16° F) with massive migrations of animals and plants and shifts in climate zones. Notably, despite the disruption to Earth’s ecosystems, the extinction of species was remarkably light, other than a mass extinction in the rapidly warming deep ocean.

“In many respects the PETM warmed the world more than we project for future climate change, so it should come as some comfort that extinctions were mostly limited to the deep sea,” said Norris. “Unfortunately, the PETM also shows that ecological disruption can last tens of thousands of years.”

Indeed, Norris added that continuing the fossil fuel economy even for decades magnifies the period of climate instability. An abrupt halt to fossil fuel use at current levels would limit the period of future climate instability to less than 1,000 years before climate largely returns to pre-industrial norms. But, if fossil fuel use stays on its current trajectory until the end of this century, then the climate effects begin to resemble those of the PETM, with major ecological changes lasting for 20,000 years or more and a recognizable human “fingerprint” on Earth’s climate lasting for 100,000 years.

Co-authors of the review are Sandra Kirtland-Turner of Scripps Oceanography, Pincelli Hull of Yale University, and Andy Ridgwell of the University of Bristol in the United Kingdom.