Discovery has REALLY jumped the shark this year 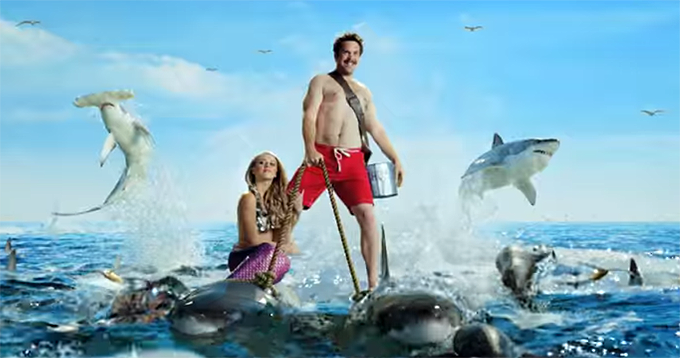 We would love to claim credit for this graphic, but this is actually Discovery’s real ad campaign for Shark Week 2014. Seriously …


Sure; last year’s Shark Week was atrocious.  The Megalodon show in particular was as abhorrent a fake “documentary” as anything we can remember.  2014’s Shark Week manages to ratchet up the idiocy, tossing to the wind any notion of intellectual decency or honesty. Frankly, we don’t know if it’s funny or disgusting.

Here’s a rundown of the shows viewers can look forward to (complete with Advanced Aquarist’s commentaries):

Lair of the Mega Shark: “Experts” “risk everything” to go searching for the “legendary” fabled “lord of the sharks.” We almost exhausted the world supply of air quotes in one sentence.  We think an erratum to the title is necessary: “Liar of the Mega Shark.”

Zombie Sharks: While the title implies monumental stupidity, this show actually describes inducing tonic immobility, a well known shark phenomenon, in a Great White Shark. Unfortunately, we’re sure that like the title, this show will be filled with sensationalism and misinformation.

Monster Hammerhead: Tell us if you’ve heard this one already: Expedition to find a mythical killer shark.

Spawn of Jaws 2: The Birth: Yet another kitschy title with potentially quality footage.  Scientists follow a female great white and attempt to be the first to capture the birth of a baby great white shark.  If the show fails to deliver on this premise, we may just have to write a strongly worded letter to Discovery.  Yes; that’s a threat.

Great White Matrix: A show about an epidemic of great white shark attacks.  Does anyone remember the early Shark Week shows that weren’t all about fear … shows that actually esteemed sharks as important animals in the world’s ecosystems?  Neither does Discovery.

Air Jaws: Fins of Fury:  Finally.  An absurd title with equally absurd content.  Viewers once again are invited to track down a legendary mega-shark (this cutie is named Colossus), but it’s not just your average legendary shark hunt.  No, sir.  We are promised high tech underwater gadgetry.  Crisis averted.

Jaws Strikes Back:  Strikes back at what?  Marine biologists film the hunting behavior of “the largest great white sharks on earth” at Guadeloupe Islands.  That’s it!? Snooze.  At least vote some sharks off the island.

I Escaped Jaws 2:  Shark Week 2013’s “I Escaped Jaws” didn’t induce enough panic in the masses.  Hopefully the sequel will.

Shark of Darkness: Submarine Returns: We just watched this show tonight.  It was more fake footage interlaced with real footage to “prove” the existence of a legendary killer shark named Submarine … the same story as 2013’s Megalodon, just a different boogeyman.

Megalodon: The New Evidence:  Discovery is doubling down on its maligned 2013 show.  I guess if you’re the laughing stock of the scientific community, you might as well commit all the way.