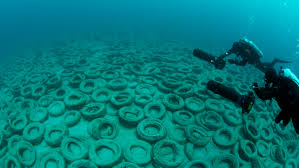 This story hits close to home for me, living just miles away from Hugh Taylor Birch State Park, I’m quite familiar with the harrowing scene of rows of abandoned looking, underwater tires. An estimated 700,000 tires were dumped into the ocean off the State Park. During the 1970’s, this was a very popular idea of usage for old tires, with the hope to recreate artificial reefs. As i wrote about just a few weeks ago, similar tire reefs are around the world, with the most recent clean up taking place off the coast of South France.Unfortunately, while well intended, the tire reefs were quite a fail. Instead of creating marine life, the tires actually were pulled through the currents, thereby killing live corals on impact. The Florida Department of Environmental  Protection has budgeted 1.6 million dollars to clean up the tires. The two year project is estimated to remove about 90,000 of the tires, those which are closest to the coral reefs. The tires will be hauled out by commercial divers, who use helmets and airlines tethered to the ship. Once removed,t he tires will be taken to Tampa, where they will be taken to an energy plant, to generate electricity. Although this just a small amount of the tires which are out there, it is a start in the right direction.  MORE