Terence Barry, senior scientist in animal science, shows one of many tanks of fish being studied at the Water Science and Engineering Laboratory, where he researches aquaculture and the stress response in fish. Credit: Jeff Miller

Scientists have known for years that when some fish sense predators eating members of their species, they try to depart the scene of the crime and swim toward safer waters. This sensible behavior is exactly what evolution would be expected to produce.

Now, a group at the University of Wisconsin–Madison has shown a second, equally sensible result of the evolutionary pressure called predation: faster growth among the surviving fish.

Large fish, explains lab director Terence Barry, senior scientist in animal sciences at the UW, are harder for the predator to eat.

The discovery, now published online in the Journal of Fish Biology resulted from Barry’s attempt to make the best of a bad situation. “I was trying a new method to raise larval yellow perch, which are hard to rear,” he says, “and I had 2,000 small, 2-gram fish in the tank. My perch were ready to sell, but about half had a spinal deformity, probably due to a nutritional deficiency, and I decided to feed these fish to a couple of big walleyes we were raising.”

So far, the process was standard in the field of aquaculture, where fish sales and finding food for predatory fish are a matter of course.

What happened next was not standard at all, Barry says. “A student came to me three weeks later (and said), ‘Did you see those fish?’ To the naked eye, the perch that were not eaten were about twice as big as expected. I thought, ‘What’s going on here?’”

Pakou Yang, who was in the lab as part of the university’s PEOPLE Program, took on the experiment. In one test, the odors from predatory walleye eating yellow perch flowed into another tank containing yellow perch fingerlings — and these fish grew faster.

The cause had to be something in the water, Barry says, “but it was not just coming from the walleye themselves, since the fast growth only happened when walleye were eating perch each day and the perch and the walleye shared their water supply.” 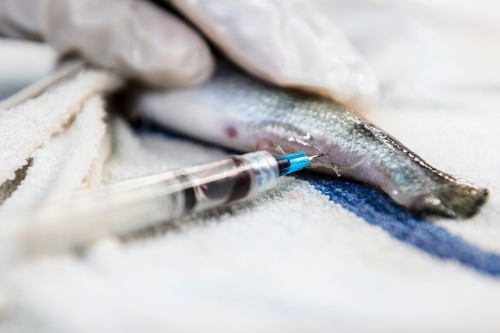 A blood sample is drawn from a yellow perch. Photo: Jeff Miller

Further investigation showed that the cause was a pheromone that might be released from the perch skin, the feces or urine of the walleye, or even stress hormones that leaked from the perch into the water. Pheromones are chemicals that cause specific behavioral changes, usually at low doses, in organisms that sense them.

Barry, who grew up in Madison, has a B.S. in zoology and a Ph.D. in endocrinology from UW–Madison. He served in the Peace Corps in the western Pacific nation of Samoa and raised yellow perch at his fish farm in Poy Sippi, Wisconsin, for 10 years.

The finding builds on the picture of the water-borne “alarm substances” that are released during predation. Not only could they cause prey fish to scatter and, in the case of one species of carp, cause them to grow too wide to fit a predator’s mouth. Now the substance was causing faster growth in length and weight.

“Nobody had shown that the fish would grow big, and it was awesome, but still, it was just one experiment,” Barry says, “so we set up five treatments and saw more or less the exact same thing.”

Perch growth accelerated even if the walleye ate fathead minnows, but the phenomenon did not appear in walleye preyed upon by northern pike, perhaps because walleye are less often victims of predators than perch.

The experiments do not prove the evolutionary basis for the phenomenon, but fleeing and growing too large for a predator both make sense in terms of species survival, Barry says. 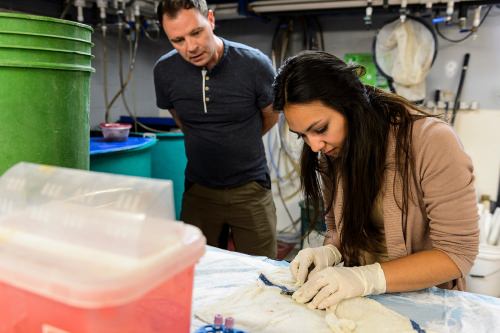 “In water, the surviving perch grow twice as fast, because they are smelling something that signals the presence of predators,” Barry says. “We do know that chemical communication is widespread in fish. When a male smells a female that is ready to spawn, it gets a surge in the pituitary hormone gonadotropin, which binds to the testes, causing them to produce testosterone, leading to sperm production. We think a similar thing may be going on here where the growth-promoting pheromone causes a surge in pituitary growth hormone.

Barry says yellow perch grow too slowly to interest most fish farms but, “if we can speed up the growth, it’s got a lot of commercial potential.” He has filed a disclosure with the Wisconsin Alumni Research Foundation covering the use of pheromones to increase fish growth; a patent filing is expected.

Barry, Paul Hoppe, a Ph.D. student in reproductive endocrinology, and colleagues hypothesize that chondroitin sulfate may be the chemical signal.

Finding this kind of stimulus-response reaction is satisfying, since the response makes so much sense, Barry says. “We were not looking for this phenomenon, but we do know that underwater, chemicals travel further than light. Fish can’t survive without chemical communication.”

[via the University of Wisconsin-Madison] 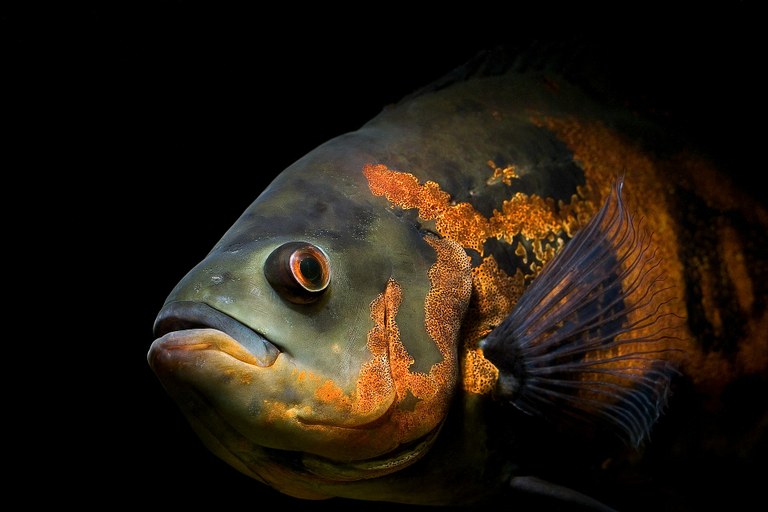