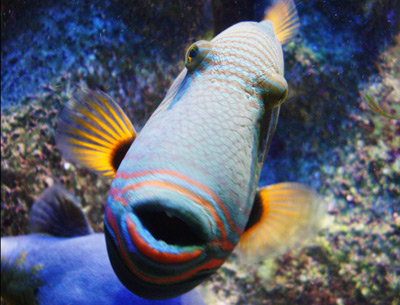 Undulate triggerfish (Balistapus undulatus) are well-known for their belligerent natureLFS staffer to customer eyeing sohal tang as potential purchase: “Hmm, I don’t think that fish would be a good choice for your tank. It can get very aggressive, and most of the fish you have in there now are pretty shy and passive. Customer to staffer: “Yeah, I know sohals have a reputation for aggressiveness, but it’ll be the last fish introduced to the tank. Besides, you have to remember that individuals of a species are going to vary to some degree in their behavior. I’m willing to take my chances.”This is one of those circumstances (albeit a totally fabricated one) in which a hobbyist willingly ignores good advice and overrides common sense because, come hell or high water, he or she just really wants a particular specimen. And, in this context, referencing the variable behavior among individuals within a species is merely another manifestation of self-delusion. Don’t get me wrong, there most definitely can be considerable behavioral variation within a species. For example, I’ve kept several yellow tangs over the years, and these individuals have ranged in their level of assertiveness toward perceived competitors anywhere from pushover to outright bully MORE