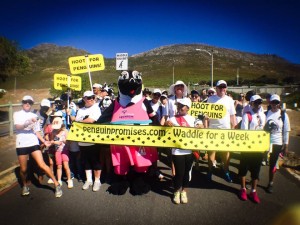 The Waddle for a Week is an annual event that brings together committed, conservation-minded citizens keen to raise awareness about the plight of the African penguin.

Starting in Gansbaai, the waddlers covered a 124km route along the Western Cape coast to raise awareness for the African penguin, which was once abundant in this area but is now endangered.  (Some scientists project that they could become extinct within the next 20 years due to a dramatic drop in the number of breeding pairs).

All it took was a few aquarium staff to get this, now much-anticipated annual event, going.     The waddlers walk not for money, but for the love of these amazing animals!  Yes, all they want is for people to show their love for the penguins and the planet.

Pedestrians, cyclists and onlookers of all sorts are informed about the Penguin Promises campaign as the waddlers walk along the coastline.  The campaign aims to get people promising to do something for the planet’s future, why not pledge your promise? 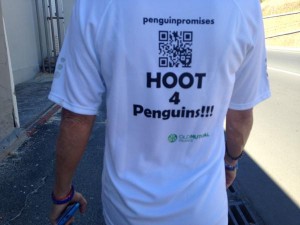 For more information go to: http://penguinpromises.com/what-you-can-do.html