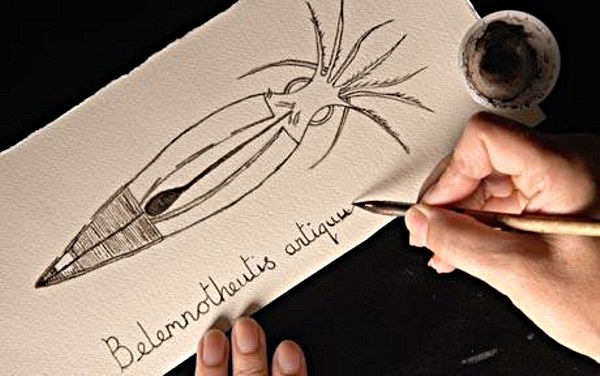 Squid, Belemnotheutis antiquus, drawn with its own fossilized ink. Photo by BNPS.


The squid, Belemnotheutis antiquus, was uncovered during a recent Victorian dig in Trowbridge, Wiltshire, UK.

The scientists excavating the area broke open one of the rocks only to find the fossilized remains of the aforementioned squid inside with a very well preserved ink sack. After realizing what they had found, a bit of the fossilized ink was ground up and mixed with ammonia to make a crude ink. The ink was actually good enough to allow an artist to draw the fossilized animal, along with its Latin name, on paper.

Leader of the excavation, Dr. Phil Wilby stated that “normally you would find only the hard parts like the shell and bones fossilised but there are a handful of locations around the world where soft preservation of the muscle, guts and gills has taken place. … It is difficult to imagine how you can have something as soft and sloppy as an ink sac fossilised in three dimension, still black, and inside a rock that is 150 million years old.”  Apparently it happened in this case.

The squid is now part of the British Geological Survey collection and an amount of the ink has been sent to Yale University for chemical analysis.