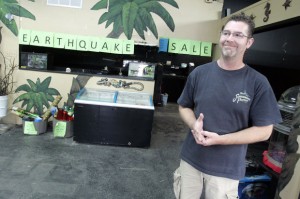 Running an aquarium store these days is difficult enough as it is. Imagine trying to rebuild the business you worked so hard to establish after a devastating earthquake, when both you and many of your customers lost their aquariums. This is the unfortunate reality for Napa Valley’s ‘Aquatics World’, the only fish store in town. I wrote about this story on Reefs.com back in August, after the earthquake hit, you can read the article here. The damage seen in the video really shows the extent of the earthquake’s impact. The earthquake hit Napa on August 24, 2014, in the middle of the night. When Jacques surveyed the damage the next morning, out of 130 tanks, only 9 were still functional. With no power for days, recovery and clean up was difficult. Since the first article, the owner of Aquatics World, Jim Jacques, decided to close his doors at the end of September. With damage over $100,000.00 and many people in town deciding not to restore their own tanks after the quake, the losses were too much to sustain. Jacques is unsure whether he will be opening another aquarium store, in Napa or elsewhere, but doesn’t rule out the possibility.