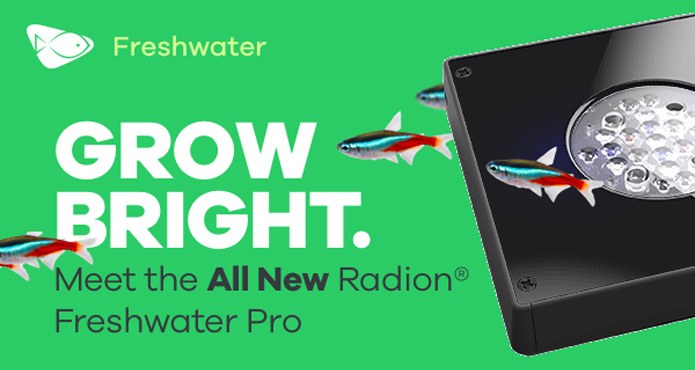 
The XR15FW features five independently controlled channels.  The LEDs of each channel are 1) 8x cool white, 2) 7x warm white, 3) 4x red, 4) 2x green, and 5) 2x blue LEDs.  With each channel at full intensity, the light yields over 90 watts of output.

Compared to the marine/reefkeeping XR15W, the Ecotech has shifted the spectral emphasis of the XR15FW towards the warmer/red end of the spectrum at full output. There are far less blue LEDs (no royal blue or UV LEDs) but more white and red LEDs.  The combined spectrum has peaks at both the blue and red spectra, which corresponds to the absorption peaks of chlorophyll A.  Clearly, the XR15FW is intended to optimize growth for plants like grow lights … only with a visual output that is pleasing and natural to the human eye as well.

Like all Radions, users can customize the spectrum and lighting schedule via Ecotech‘s EcoSmart Live app or website.  Wireless control can be achieved with Ecotech’s optional Reeflink device.