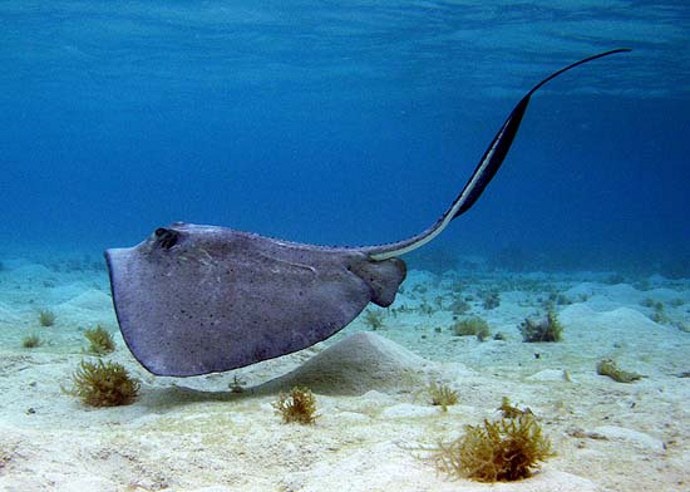 Southern stingray off the coast of Belize.


Stingray City is an ecotourist attraction in the Cayman Islands where an estimated 1 million tourists visit each year for an opportunity to mingle with the large local population of southern stingrays, Dasyatis americana.

Researchers Guy Harvey and Mahmood Shivji wanted to know if all of the interaction caused a change in behavior of the southern stingrays that call Stingray City / Sandbar their home. They published their research in the March 18 issue of PLoS ONE: “Supplemental Feeding for Ecotourism Reverses Diel Activity and Alters Movement Patterns and Spatial Distribution of the Southern Stingray, Dasyatis americana.”

Co-author Guy Harvey stated that “measuring that [ecotourism] impact is important because there’s a lot of interest in creating more of these interactive ecotourism operations, but we know little about the life histories of the animals involved or how they might change.” Shivji, the other co-author on the article said they “…saw some very clear and very prominent behavioral changes, and were surprised by how these large animals had essentially become homebodies in a tiny area.”

Southern stingrays are normally solitary, nocturnal animals, sleeping during the day and feeding at night traveling long distances in search of food. The rays at Stingray City, however, show very different behavior. Instead of solitary lives, they live together in dense clusters rarely traveling far from Stingray City and sometimes even schooling together during feeding. The rays also switched their sleeping patterns from nocturnal to swimming and feeding during the day and sleeping at night. Aggression between animals also increased with rays showing bite marks from other rays. Finally, their mating patterns changed. Normal southern rays mate only during mating season each year. Stingray City southern rays, however, mate year-round.

These are significant changes that could have dire consequences for the local population of rays. “Right now, these animals have no protection at all,” mentions Guy Harvey. “Without more studies like these, we won’t know what that means for the wildlife or if we need to take action. It’s unclear how much of the stingray’s daily diet comes from tourism provided food, but the good news is we have seen the animals forage when tourists are absent suggesting that these animal are not completely dependent on these handouts.”