By now it is obvious that human activity is having an enormous impact on planet Earth, with our species’ population growth and concomitant need for energy, food, and space we are transforming our planet’s oceans, land mass, and atmosphere. It doesn’t take much thought to conclude that we are an invasive species, and it doesn’t matter whether we think that this is good or bad, it simply is. As aquarists, who have a unique love and understanding of aquatic creatures, this offers us some opportunities to help save what is left of the natural aquatic world.

Last week while carefully observing the activity in my 500-gallon freshwater aquarium it became obvious to me that most of the fauna and flora were growing and reproducing. One morning in particular I noticed that my Kribensis cichlids (Pelvicachromis pulcher ) had the right side of the 10-foot tank to themselves. A few days later they were protecting a small school of fry.

Also, I had been bartering for credit pails of Pennywort (Hydrocotyle leucocephala) with a local pet store on Cape Cod. Also last week I went to collect more Pennywort for barter when I discovered some swordtail fry hiding in the Pennywort; these fry were about 1/3- inch long and already had adult coloration. – in this case red and black.

The point of all of this is my belief that we aquarists – freshwater or saltwater – should take as few fish and invertebrates from the planet’s oceans and streams as possible. Today there is an enormous quantity of privately and commercially grown/raised fauna and flora available to aquarists. I know, I know, you can’t get a commercially bred Achilles tang (Acanthurus achilles) and many other beautiful marine fish like it. In fact, the Achilles tang has always been my favorite reef fish. But given the way the world’s oceans are being fished out, and until it and others like it can be bred commercially, it ought to be left in the ocean. It wasn’t too long ago that we thought nature’s so-called bounty was limitless, but now we know better. As the species that is at the top of the food chain it is our obligation to protect the natural world so that our children can marvel at it too. 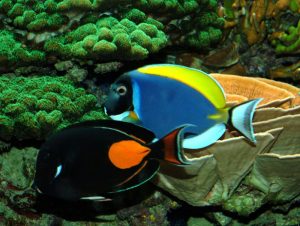 I’m fully aware that this is an uphill battle, but it may very well be the most important one we fight – the alternative is our planet paved over with asphalt. Ecological things are changing on our planet with dizzying speed. I grew up in Brooklyn, NYC, and in my own life time things have changed so fast that I often find it hard to comprehend how much. For example, as a boy I used to get up in the morning to give the milkman’s horse a carrot, and across the dirt road in front of my house were potato and onion fields. Now there are houses, and you buy your milk in super markets.

Let me know what you think in the comments below!