Since I’ve been keeping in captivity marine fish for better than 40-years I think it might be of interest to some of our readers for me to do a series of editorials on some of the more problematic fish I’ve had over those years. So, this month I’m going to write about a species that has always been a favorite of mine and one that can present problems in captivity; I’m referring to the achilles tang (Acanthurus achilles). 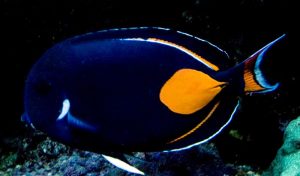 It is found primarily in and around the coral reefs of the Pacific, especially around the Hawaii and Pitcairn islands. However, it has been occasionally seen in the corals reef off of Southern Mexico.

Like all tangs it is a herbivore, spending most of its day grazing on benthic algae. However, it will accept some animal matter, especially in captivity. Over the years I have had 3 Achilles, and have had success with each of them. With each keeping them well fed was essential. I have found that each needed a good feeding with a quality flake food at least once a day. Two of the three would only eat OSI spirulina and marine flakes. I’m not sure why this was, and with such a small sampling, one ought not to assume that all Achilles will eat only OSI flake foods. It is however my impression that OSI flakes have a stronger order than some of the other flake foods that were rejected. One again, this is a purely anecdotal observation, and is based on a very small sampling.

With Achilles, as well as other surgeonfish, it is important to provide vegetable matter that can be grazed on throughout the day. I accomplished this by tying Nori to a small section of PVC that I hung in the tank. See photo below, 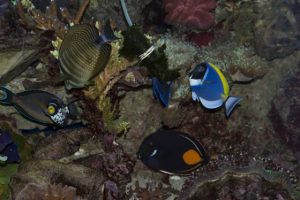 I would not consider keeping an Achilles in a tank any smaller than a 100- gallons. Furthermore, I would not attempt an Achilles in a fish only tank. Like most surgeonfish Achilles are prone to infestation by parasitic protozoans like “salt water Ich” and or “velvet.” The three that most come to mind are Cryptocaryon irritans, Brooklynella hostilis, and Amyloodinium ocellatum. For a variety of reasons reef fish in established reef tanks have far fewer problems with parasites than in fish only tanks. Once again, this is an anecdotal observation, but one based on my years of observation.

Though surgeonfish have a reputation for aggression, species dependant, especially toward members of their own species, followed by aggression toward other surgeon fish with a similar body type, it is very important to keep this in mind when attempting to keep several surgeonfish in a community reef tank. It is therefore not surprising that it is difficult to keep a Powderblue (Acanthurus leucosternon) with an Achilles. Though one cannot generalize about an individual fish from the behavior of a species, I have never seen a Powderblue that’s established accept an Achilles. You may have noticed that I have just such a duo in my community reef. The Powderblue was established before the introduction of the Achilles. How did this happen, without deadly warfare? The answer is that the tank is 10-feet long and the Achilles twice the size of the Powderblue. Even then they pretty much divided the tank in half, coming together as can be seen from the photo only to feed. 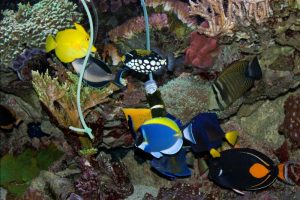 To have success with Achilles it is essential to get a healthy one to begin with. Do not purchase one that has not been quarantined for at least three weeks, and certainly not one that is listlessly swimming around in circles, often called death spirals. Be sure also that it is eating well, and not only on frozen or live brine shrimp. If you get a healthy specimen, and treat it well it can do as well as any other surgeonfish, like this one pictured below. 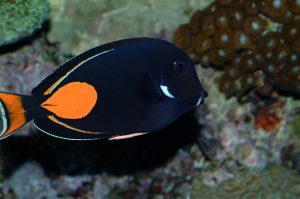