Just about a year ago a pet store in Portland,
Maine going out of business asked me if I would take a seastar. I
recognized that it was a Protoreaster lincki (commonly called a
red-spined star), and consequently realized that it would be unwise to put
it into my reef tank, but it might be okay in my 40-gallon refugium. I’m
happy to report that it has made its home there for about a year. From what
I can tell it appears to thriving. It moves slowly – it is after all a
seastar – about the tank, preferring the glass bottom and walls to the old
coral skeletons. From what I can tell it eats the “slime off of the glass.”
Exactly what the slime is composed of that it eats is unclear. I suspect
much of the slime is diatoms. It doesn’t have a taste for cyanobacteria –
unfortunately. One of these days I might try it in the reef tank, since
from what I have observed it is only interested in “slime.” 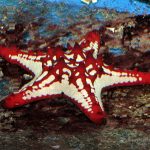 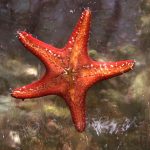 As many of you know I like to push the reef keeping envelope. I
currently have a pair of Red Sea purple tangs (Zebrasoma
xanthurus), a pair of Zebrasoma desjardiniis, a A. achilles,
and a Zebrasoma flavescens. Also have a juvenile Parcanthurus
hepatus in the refugium, which I will add to the reef tank when it is
big and strong enough. I also have a clown trigger and Huma Huma trigger in
the reef tank. All of the above, with the exception of the Achilles where
put in at the same time as juveniles. Interestingly enough, they have
easily quadrupled size in less than a year. The Achilles was added later,
but was much larger than the other tangs. All of the tangs squabble, but I
have yet to see a torn fin, or ripped body. The other so-called reef tank
no, no, is a mature Euxiphipops navarchus. Admittedly, the tank is
large, with lots of hiding places. One of the great things about lots of
tangs is that when not eating food offered by me they spend most of the day
grazing on the rocks, walls, and equipment, and in that way keep the tank
clean of unwanted algae. The two following photos show some of these fish
just mentioned, but I was unable to get them all together. It’s not easy to
get six tangs to pose together. 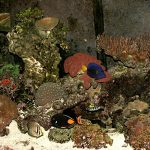 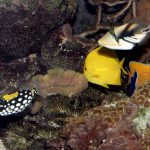 With this last issue for 2006, I want to express my appreciation for the
growing readership of Advanced Aquarist. Currently, our
publication gets over 5 million hits a month, with 1,323,630 page turns per
month, and is read by about one hundred thousand unique visitors each
month. These numbers are only for our publication; Reefs.org gets close to
12 million hits monthly.