In this last issue of 2009 I want to return to a topic that has been discussed before, the “old tank syndrome,” especially in light of Dana Riddle’s article on water changes appearing in this issue.

If the reef keeper does everything right, regarding setup, water circulation, lighting, fauna and flora, etc. after about 3 to 6 months most reef tanks begin to look great, with a wide variety of corals growing well. Based on my experience, however, after about two years conditions in that tank begin to deteriorate. Everything doesn’t die, but most manmade reefs lose their ability to provide a habitat for the variety of corals that it initially did. Furthermore, said reef aquarium begins to look more lagoonal and less like a pristine coral reef – in other words eutrophication increases. One of the earliest indications of this is the appearance of cyanobacteria – that troublesome purple slime. There may very well be many reasons for this. Some that come to mind are:

I’m sure that there are others that I forgot to mention, but it’s these things that appear to lead to the “old tank syndrome.” In my opinion, one of the best things that the reef aquarist can do to delay or eliminate the “old tank syndrome” is to religiously change a significant amount of water. As many of you know I have recently converted one of my 10-foot tanks to a freshwater planted tank, and because of that I have been doing a lot of reading about how to maintain a successful planted aquarium.

Every author I’ve read so far recommends a 20 to 50% water change every week or two. That’s a lot of water changing; however, clean freshwater is relatively easy to come by, even in large quantities. However, such is not the case in a saltwater aquarium. The expensive involved in changing half of the water with pristine seawater every week or two is expensive and time consuming.

Nevertheless, changing as much water as possible is still one of the best ways to keep a reef tank healthy. Dana Riddle’s article offers good information on how to do this effectively. 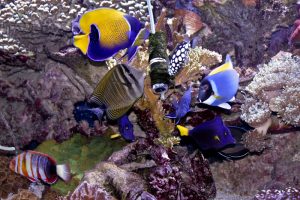 Most of these fish were added to my reef tank when they were one quarter the size shown here. Clearly, the increased biomass due to their growth increased the waste produced by them, making it more difficult over the long run to keep a balance between the consumers and producers of waste. Changing a lot of water will help.