Several weeks ago, my old and dear friend Doug
Robbins, Ph.D. died from complications from liver replacement surgery. Doug
was a regular contributor to Advanced Aquarist and Aquarium
Frontiers before that, and an avid aquarist with both freshwater and
marine aquariums. 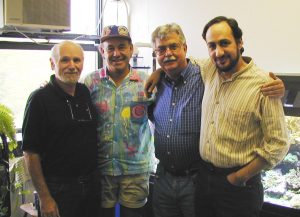 Everyone in our hobby and discipline will miss his enthusiasm and
knowledge. Pictured above is Doug on the left, Peter Wilkens, Randy
Donowitz, and myself. This picture was taken at the Writing Center at Pratt
Institute, when Peter Wilkens came to the USA to visit me. For some of you
younger aquarists who may not know, Peter Wilkens, in my opinion, is the
true father of reef keeping. Though quite incomplete, a useful introduction
to the development of reef keeping can be found at the following
link, where some of Wilken’s contributions are listed.

By doing a search by author you will find
8 articles by Doug Robbins published in Advanced Aquarist.
Doug also wrote numerous articles for Aquarium Frontiers; some of
you may have copies of those issues. Doug Robbins has kept fish and small
animals in glass tanks for almost his whole lifetime. His father started
him in the hobby and until Doug’s death he maintained his father’s 50
gallon Metaframe stainless steel, chromium plated fresh water community
display tank. Doug maintained that tank for 40-years. He also maintained a
30 gallon minireef and a small backyard goldfish pond. This while at Pratt
Institute. When he moved to Hawaii, after retirement from Pratt, he took
the 50-gallon Metaframe with him and reestablished it as a beautiful Dutch
style freshwater aquarium. He also set up 50-gallon reef tank. Here are
pictures of flame angels – tank raised – and an adult housed in that tank,
with a link to that article. As
you can see from a reading of his articles he was deeply committed to the
ecological movement and marine conservation. 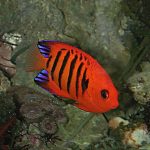 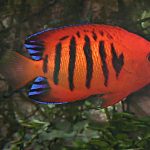 I first met Doug around 1966, when we both became instructors at Pratt
Institute, he in Social Science and me in the Humanities. Ultimately, Doug
became the chairperson of the social Science department. For many years I
would pick up Doug at Pratt, drive to Columbia University, the Post-doc.
Center, and pick up Craig Bingman, where upon we would head North to Greg
Schiemer’s and Bob Starks’ and together check out LPSs that appealed to
this collection of coralaholics. Those were the days. Doug will be missed
by all of us.

“Aloha! I am a huge fan of your online magazine and thought you might be
interested in this. It is a dream come true. I think every diver dreams of
finding something that nobody has ever seen before. Just think 2 days ago
nobody knew this type of fish existed. This fish is a hybrid of two fish
found only in Hawaii.

This is what the authority on fish said after seeing the picture:

“Amazing! I am as sure as I can be withhout DNA testing that that is a
potteri fisheri hybrid and none have ever been documented until now.”

Database Coordinator for Natural Sciences and Associate Zoologist in
Ichthyology

Both of these fish are not found anywhere else in the world, endemic to
Hawaii. 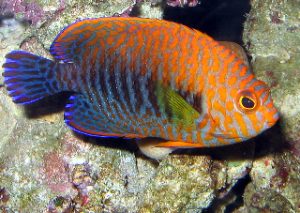 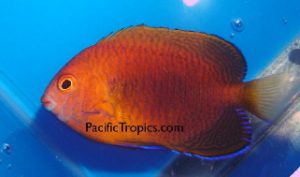