As I promised in my last editorial here is an update on the progress of my 10-foot, 500-gallon freshwater community aquarium. Along with a series of photos I just took I’ll record how I maintain the biotope, with some water quality measurements. The relatively high temperature, use of CO2, feeding regime, and biweekly water changes are mostly dictated by the needs of the 9 discus fish.

I generally feed the tank twice a day. In the AM I feed discus fish flake food, which all of the fish enjoy. In the PM I feed frozen blood worms, which I feed every 10-minutes until gone. I do this to make sure that the discus fish get enough to eat. They are slower feeders than some of the rest of the fish, and two of the discus will only eat blood worms.

By the use of CO2, injection, and controlled by a pH controller I maintain the pH at between 6.5 and 6.8. I change about 50% of the water every two weeks. Fortunately, the local water is soft and free of nitrates and phosphates. With the water changes and heavy plant growth, especially from the Java fern (Microsorum pteropus), and various Cryptocoryne varieties I’m able to keep the nitrate concentration below 10-PPM, and general hardness below 5-dKH. Interestingly, the Java fern has now attached itself to the outlet of the EcoTech. See below! 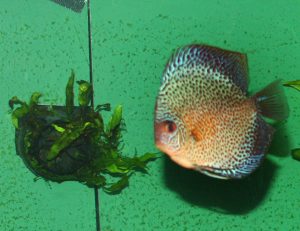 The aquarium is filtered by a large Eheim canister filter, in which the filter media has not been changed in over a year. I do not change the media because I do not want to interfere with its ability to convert toxic ammonia, and nitrites into nitrates. I also use a smaller canister filter filled with activated carbon, which is changed every two weeks.

Following is a series of pictures just taken: 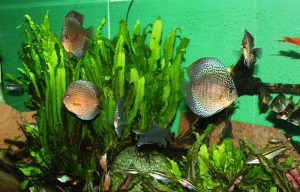 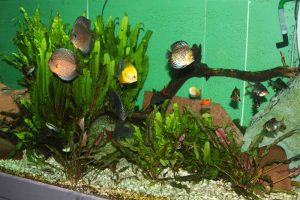 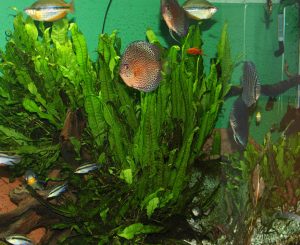 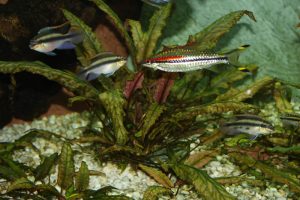 Notice the small army of Kribensis cichlids (Pelvicachromis pulcher), a product of an in tank spawning, and an event that I hope will not repeat itself. I made no attempt to facilitate this. It is a large tank, but I certainly do not want any more of these delightful cichlids. Furthermore, trying to catch them is close to impossible. Perhaps I can convince the current school to practice birth control.

Also pictured above is one of a pair of red lined torpedo barbs (Puntius denisonii). These fast swimmers come from western India, and are quite peaceful.