As promised to our freshwater readers, I will report on my 500-gallon freshwater planted aquarium’s progress. First of all let me say that I’m enjoying this aquarium immensely. I particularly enjoy the size perspective between the plants, rock, and driftwood with that of the schools of mostly small fish like rummy-nose tetras (Hemigrammus rhodostomus) and cardinal tetras (Paracheirodon axelrodi) that I have introduced to the tank.

As I pointed out before I intended to go low tech, but heeding the device I gleaned from several books on freshwater planted tanks, from readers, and Jake Adams I had to add more light and a CO2 controller-injection system. The CO2 system keeps the pH at about 6.6. Currently, I have 12 4-foot T5 54 HO watt bulbs. This gives me a total of 648-watts. However, according to many experts this is not nearly enough for certain plants, especially since my tank is 30-inches high. Nevertheless, most of the plants are doing quite well. The photo period is 12-hours. Half of these bulbs have a color temperature of 10K, and the other half are so-called freshwater bulbs – not sure of their color temperature. This brings me to a question: Should I use all 10K bulbs or continue with half that supposedly have a color temperature specifically designed for freshwater plants?

So far I have not had a problem with algae. I have four algae eating cat fish, two bristlenose plecostomuses (Ancistrus temminckii) and one large common pleco (Plecostomus punctatus), and one whiptail Loricaria sp. I also have two very active red tail sharks (Epalzeorhynchos bicolor). I’m aware that many experts say that large Plecos eat plants, but I have not witnessed that yet. I also have a large Leporinus fasciatus, which I was told would eat my plants, but so far it hasn’t done so. It is now about 6-inches long. I also have a lot of fish, which is also a no no, but still no problem.

I suppose it’s now time to try some of the more delicate plants, like a Madagascar lace (Aponogeton madagascariensis). I would appreciate any suggestion or advice regarding this plant. 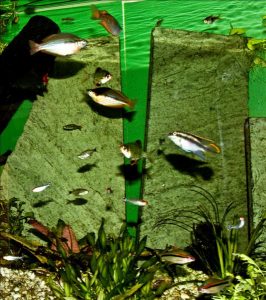 Here is another picture of another section of my freshwater aquarium. The corkscrew Vallisneria (Vallisneria Americana) is now sending out runners in all directions, after not doing anything for several months. I would like to try one or two discus fish, but suspect that the temperature I keep my tank at this time of the year is too low for them — any advice about this? 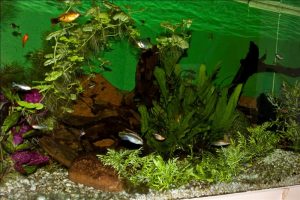