Water change in reef aquaria is a topic that induces what appears to be endless discussion and, in my opinion, for good reason. Some reef keepers talk about the value of water changes, arguing that it removes or at least dilutes relatively toxic substances that have built up over time due to the metabolic processes of the living organisms in their reef biotopes. Others argue that water changes replace essential trace elements that have been over time depleted by these same reef organisms. My experience tells me that both arguments are correct.

Many years ago Peter Wilkens studied the loss of trace elements in a particular reef tank that he maintained. The formulation of Combisan was based on this research. However, what is true of one reef tank is not necessarily true of another as there are too many variables – biomass, feeding, temperature, lighting, etc. — in a complex biological environment to account for all of them. Nonetheless, it is anecdotally safe to assume that trace elements are lost over a given time period, which ones and at what concentration is almost impossible to be definitive about.

What is added to the water that is toxic to some and partially toxic to others by the organisms over time in a reef tank is equally difficult to know with precision. What we do know is that changes occur, and these changes reduce the habitability of our man/woman made reef environment. It is true that you can go a long time without a water change, which I have done myself – it is easier to do in a large reef tank –, but slowly one begins to notice changes, changes that clearly indicate that the bio-chemical environment for most if not all of the captive reef creatures is declining. For example, some fish begin to show signs of disease, coral’s polyp extension decreases, and growth is increasingly limited. More sensitive organisms decline first, making it easy for the reef keeper to ascribe it to something else.

I have been maintaining a reef tank for many years, and can say without hesitation that significant water changes are vital. I prefer less frequent, but larger water changes. To me, 10% weekly is less effective than 30% monthly. However, if you change a large percentage of water be sure to adjust the temperature, pH, and salinity to match that of the water being exchanged. 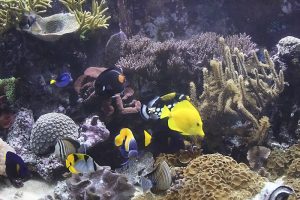 The Gorgonian in the photograph stopped opening its polyps until I changed over 200-gallons of water last week. Incidentally, this Gorgonian was collected by me in the Bahamas with Julian Sprung and Peter Wilkens almost 20-years ago. Over the years I have given many cuttings from it away, and it currently grows in three different locations in my reef tank. It’s very good at telling me when I need to change water.