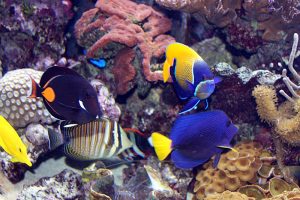 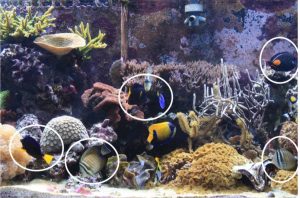 The way I have managed to have all of these tangs in one tank was essentially governed by two things. First, and most importantly, was how they were introduced. I introduced all of the tangs as juveniles all at the same time. In other words they grew up together. Secondly, they all grew up in a large tank with lots of hiding places. The tank holds over 400-gallons of water and is connected to a 300-gallon sump. All of them grew quite rapidly and became more aggressive as they matured, first especially toward members of their own species and next to those that had the most similar body shape. The result of this was that yellow (Zebrasoma flavescens) and red sea purple tangs established different ends of the tank, with something of a “no man’s land” (tang’s sea) in the middle of the tank. The same is true of the red sea sailfin tangs. The only time they are all in the same area is at feeding time. Interestingly enough, my achilles tang (Acanthurus achilles) is the least interested in the other tangs. Keep in mind that one can never account for the behavior of individual fish – one never knows when territorial fish as a group will have one member who is a pacifist.