Reef keepers have known for a long time that reef aquariums which contain a large number of fish that are well fed tend to have an increasing amount of phosphate in the water. This is a serious problem, because a phosphate level greater than 0.5 ppm interferes with the ability of hermatypic corals to calcify. One solution to this is to change water on a rather continuous basis. A great deal of water I might add. This, of course, becomes an expensive proposition, to say nothing of the work involved, especially when dealing with a large reef tank.

Fortunately, a number of manufacturers have provided the industry with media that absorbs phosphates. I’m referring to the ferric oxide media contained within ROWAphos, PhosBan, and other types. However, as effectively as these media are is generally it is a fairly expensive proposition to replace this media when it becomes saturated. In this issue, we have a feature article entitled Regeneration of granular ferric oxide media with sodium hydroxide, by Matt Wandell and Laura Kormos. As can be seen from the title, it is possible to regenerate ferric oxide media. At this particular time in history when the economy is suffering saving some money is important. 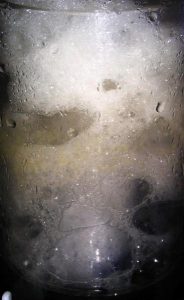