Dear Reader, I have two confessions to make: the first is that I can’t do things in a small way, and second, low tech is not compatible with my personality. As you know from my last editorial I decided to make my old 500-gallon tank into a freshwater planted tank and that I was going to do it low tech with only two 4-foot fluorescent bulbs and a large canister filter. That was last month. Since then I started reading books on modern freshwater planted tanks and came to the conclusion that I needed more light and a way to add CO2 to facilitate plant growth. So far I have replaced my two fluorescent fixtures with two 4-foot fixtures each housing two 56 watt bulbs. And, this weekend I will add a CO2 injection system. So much for low tech 🙂

One final confession: I’m really having a great time working on this planted tank. My reef tank is doing just fine, and unless Murphy strikes again, it presents no new challenges. A large Dutch style planted freshwater tank is another matter. Some of the plants I initially added are not doing well so far, but a few others are. What came in as a bulb, over the course of a few days, has grown into a spectacular flowering plant. I’m referring to Aponogeton ulvaceus. See photo below: 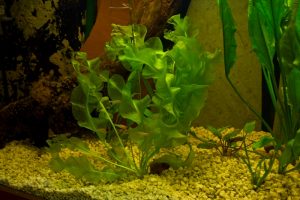 No doubt this plant was able to draw energy from its bulb, which is why it has grown so well and may also indicate that I need to find a way to fertilize the other plants that are newly anchored in essentially sterile gravel. The sword plants are just hanging in and the Sagittaria subulata are losing leaves. See photo below: 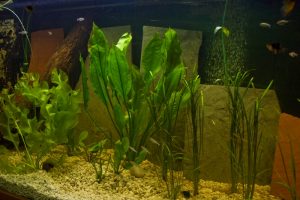 For those of you interested in freshwater planted tanks we are planning a section devoted to this particular biotope. Since I’m relatively new at this biotope I’m more than happy to receive advice from any of you wishing to give it.

The three books I’ve read so far are:

All of which are available from Amazon.com.