Hurricane Earl, which prevented me and my new wife from going to MACNA this year, reminded me of my old enemy: Murphy’s Law – “whatever can go wrong will and at the worst possible time.” This law, not actually scientific in nature is nonetheless of particular concern to aquarists, especially those with large systems that depend for the survival of their flora and fauna on electrical energy. As everyone knows Hurricanes have a way of knocking out electrical power, usually by uprooting trees that land on power lines. If the powers out for only a few hours, it is generally not a problem. However, if electrical power is out for longer than that the aquarist has to intervene to prevent a system breakdown.

Due to the approach of hurricane Earl, with its capacity to knock out electrical power for up to a week I decided to purchase an electrical generator. I’ve had gas electrical generators in the past, but found that if they lay around for a long period of time the gasoline in them tends to evaporate to some degree and become useless. The gasoline has to be drained and the spark plug or plugs have to be cleaned before the gas powered generator can be utilized. Obviously, this is a problem especially when environmental conditions in your tank are rapidly deteriorating. In my case, I found that one can purchase an electrical generator that is powered by propane. Furthermore, propane generators are available nowadays at a reasonable price. Steele makes a propane generator that produces 3500 W of power at 120 V that will generate power using a standard propane tank, the ones that are used for barbecues, and will generate that amount of power for 10 hours. One can have several of these
propane 5 gallon tanks available and produce enough electricity to keep your large tank going for probably as long as a week. Another benefit of a propane electrical generator is that they produce far less toxic fumes then does a gasoline generator. Nonetheless, the generator should be used out of doors, or in an area where there is adequate ventilation. Following, are pictures of the generator that I purchased for $500 from Amazon where shipping was free. 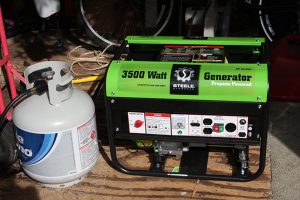 3500 Watt generator that uses propane as its fuel source. 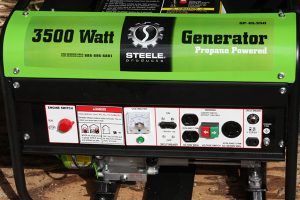 Closeup of the generator panel.

If it is not necessary or economically feasible to utilize an electrical generator it is possible to use any number of less expensive alternatives. For example, it is possible to purchase air pumps that will operate from their backup batteries when power goes out; it is also possible to stir the water manually, or even to use a bicycle pump, to pump air into the tank. These less costly alternatives have been discussed frequently in the past. However, these less costly alternatives are workable in small systems and or when the power goes out for a relatively short period of time. In my opinion, spending $500 for a propane generator especially when one considers the cost of a large reef system makes good sense.