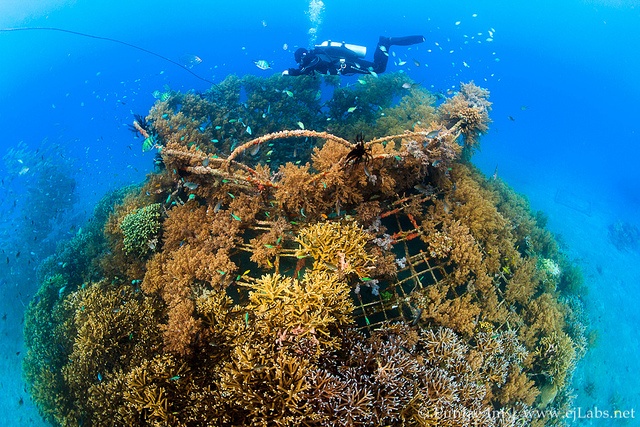 A group of ex-pats in Indonesia have devised a rather ingenious, and cool looking, plan to help save our coral reefs using bio rock technology. This structure is in Gili Trawangan, a small island, one of the three islands which makes up the ‘Gili Islands’, off the coast of Indonesia. What was previously an off the map destination is now a much more visited tourist destination, ripe with western comforts. However, as expected, more human interaction causes more potential harm to its coral reefs. Between dive tourism and fisherman, plus pollution and global warming, the reefs are under attack. The Biorock project was started a decade ago by Delphine Robbe, the manager of Gili Eco Trust. Robbe was a dive instructor, originally from France, who wanted to create a solution to the problem.  By placing these steel structures under the water, biorock technology allows coral life to thrive. For example, under the Gili water, a motor bike sits atop a steel structure that resembles a speed bump. The bio rock technology allows low voltage electric currents to run through the steel, which causes limestone to grow on the structure. The limestone eventually solidifies and it becomes a perfect substrate for coral growth. When divers see injured corals, they move the corals to the structure, where it can heal at up to 50 times faster than its normal rate. Once healed they move the divers move the coral back to the open sea.  MORE