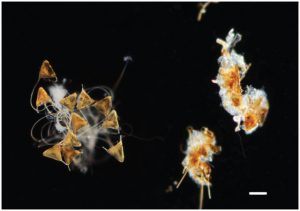 The peculiar eggs of Neobenedenia. Those on the right have been consumed by Lysmata amboinensis. Credit: Thilitz & Hutson 2015

Multiple species of Elacatinus Cleaner Gobies have been shown to severely reduce the presence of skin flukes in captivity, though their success rate appears somewhat variable (~50-99%) and may relate to maintaining the right ratio of cleaners to parasites. At the very least, they are proven to help eat a large number of parasites, as can juveniles of the Bluehead Wrasse (Thalassoma bifasciatum), though this species is generally far less effective and will cease to do so with age.

The Bluestreak Cleanerwrasse (Labroides dimidiatus) has also proven to be an effective fluke-eater, though it appears to preferentially target only the larger adult worms. On the other hand, the Cleaner Shrimp (Lysmata amboinensis) has been shown to feed on the eggs of Neobenedenia, as well as the newly hatched larvae, being able to reduce populations by half in aquarium studies.

Pederson’s Cleaner Shrimp (Periclimenes pedersoni) has a similarly rapacious appetite and has been shown able to reduce both the abundance and average size of flukes present in captivity; however, the same study showed that the Spotted Cleaner Shrimp (Periclimenes yucatanensis) and the Coral Banded Shrimp (Stenopus hispidus) had minimal effect on parasite abundance, even though both are known to feed upon them to some extent. For larger aquariums, especially reef aquariums where other control methods are less practical, a possible mitigation strategy would be to keep a mix of Elacatinus, Labroides, Lysmata and P. pederseni, which should work in concert to rid or greatly reduce all life stages of this dreaded beast.

Temperature has the same effect on Neobenedenia as it does on most fish parasites—it speeds up the life cycle. This can be either a good or a bad thing, depending on how effective your treatment methods are. At 30℃, eggs are produced after only 6 days and the life cycle can be fully completed in under 16 days. This is warmer than most aquariums are kept at, and, at 25℃, eggs first appeared at 8 days and most flukes were still present feeding on the host fish at the 16-day mark. At these temperatures, it takes around 4 days for the eggs to develop and hatch, meaning that a single fluke introduced into an aquarium can result in four generations of offspring within a month.

However, turning the temperature down to 20℃ results in egg production taking around 13 days, and, at 15℃, any eggs present will cease hatching entirely. They also feed less aggressively at these cooler temperatures, resulting in lessened epithelial thinning and ulceration. This is good news for the coldwater aquarists out there, but it provides little help for the majority who keep tropical species in tropical temperatures.

Salinity offers the most reliable and cost-effective method to control flukes, though many aquarists seem to shy away from this proven treatment due to misinformation and anecdotal tales from other hobbyists. By maintaining a salinity of 15ppt for 5 days (which is well-tolerated by everything except sharks and rays), eggs are entirely prevented from hatching. At 18ppt, it take 7 days to render eggs unviable. For any adult flukes already present on a fish, it takes just 2 days at 15ppt to completely eliminate specimens, though, at 18ppt, the treatment is no longer 100% effective.

We can use this information to arrive at a foolproof method for treating fish-only systems infected with skin flukes—lower the salinity to 15ppt and leave it there for at least a week. This will have a negligible effect on the bacterial filter or any fish present, but it will remove the offending flatworms. Alternatively, the fish can be treated separately in a quarantine tank and the display left fallow for enough time to allow any eggs to hatch (4-8 days) and the juveniles to die off (~2 days). And, of course, an infestation can be completely prevented in the first place by merely quarantining all new fish additions for a week at 15ppt, though surprisingly few aquarists take this prudent step.

Freshwater baths have often been prescribed as a reliable treatment, and, in my personal experience, a 5-10 minute dip has proven to be an effective method for forcing flukes off of an infected fish. If closely observed, flukes will be seen to detach within the first minute, but it can up to the full ten minutes for the majority of specimens to leave the host. Many aquarists may be uncomfortable leaving their fish in freshwater for such an extended period of time, but, having used this technique countless times on a wide range of species, there is little cause for concern.

Interestingly, shorter dips (~2 minutes) may actually result in a greater rate of parasitism, and, even after 20 minutes in freshwater, a small portion of flukes can still remain on the body. For those aquarists hoping to avoid a lengthy quarantine by giving new fish purchases a quick freshwater dip, be aware that this is in no way a completely reliable way to avoid introducing Neobenedenia, though regular, repeated dips, could in theory, be used to slowly eliminate a population.

Praziquantel has long been the medication of choice for treating flatworms of all kinds, but it is not equally efficacious for all species. Neobenedenia is far more resistant to this treatment than its close relative, Benedenia; administering praziquantel with food is generally ineffective and only at exceptionally high doses (2.5-5.0 ppm) in the water column was it reliably lethal. Considering the expense involved in reaching these concentrations in a large aquarium and the difficulty in calculating a proper dosage, this method is, at best, unreliable.

I’ve seen this first hand in a large retail aquarium setting, as praziquantel more often than not failed to do more than temporarily reduce the numbers of flukes present. Further complicating matters, after as little as two days, praziquantel has been shown to become undetectable in a biologically mature aquarium, presumably due to bacterial degradation. Trichlorfon (sold as Dylox) has also been attempted as a treatment, with some success noted in aquarium studies, but at least one public aquarium succeeded in killing scores of fishes using this method.

Garlic extract has been investigated as a natural remedy for treating Neobenedenia, and, interestingly, it has shown surprisingly good results on the eggs and newly hatched larvae when administered into the water column. At a high enough dosage (15.2 μL/L), hatching was reduced to around 5%, but this level of survival is still unacceptably high when attempting to entirely eliminate an infestation, and adults and juvenile flukes show high tolerance to this treatment. Alternatively, garlic can be directly added to a flake or pelleted food, which can reduce the rate of infection by 70%; however, there may be a delayed response to this acquired resistance which necessitates at least a month of regular garlic feedings before results are actually seen.

To summarize, the best method for killing Neobenedenia skin flukes is to employ a hyposalinity treatment (<15ppt) for an adequate enough period of time (7+ days) so as to ensure that zero eggs or adults can survive. In an infested fish-only aquarium, the best course of action is to simply lower the salinity directly in the display tank. The same treatment can be used as a quarantine for newly acquired fishes to prevent problems from developing in the first place. For fish heavily infested, a 10 minute dip in freshwater of an equal pH and temperature can provide more immediate relief.

Treating a reef aquarium is more daunting and would require the removal of all fishes to be treated in a separate quarantine tank. This is often easier said than done, so an alternate method would rely on a mix of cleaner organisms (Elacatinus, Labroides, Lysmata, Periclimenes) to reduce levels more naturally. Praziquantel is not strongly recommended, as it has a high likelihood of failing to completely eliminate the problem, even if it does provide some temporary relief. And, lastly, a food high in garlic should always be fed to ward off not only Neobenedenia, but many of the other common aquarium parasites as well. By following these simple rules, skin flukes should never be a problem again.