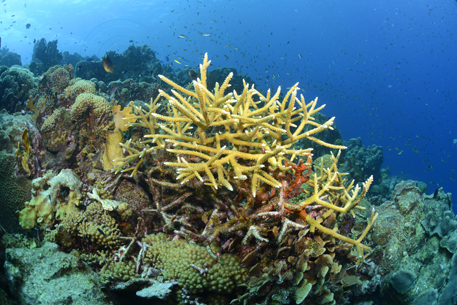 Good morning friends, I have an old colony of rare, endangered Staghorn coral for you today that has new growth popping out over the old colony. What I find interesting about this is, I thought it was all dead because the last time I saw this colony it looked brown and black and was all covered in moss; amazing how it found a way to hold on and now has all this new growth.
The dominant mode of reproduction for staghorn corals is asexual, with new colonies forming when branches break off a colony and reattach to the substrate. This life history trait allows rapid population recovery from physical disturbances such as storms. However, it makes recovery from disease or bleaching episodes (where entire colonies or even entire stands are killed) very difficult.
Sexual reproduction is via broadcast spawning of gametes into the water column once each year in August or September. Individual colonies are both male and female (simultaneous hermaphrodites) and will release millions of gametes. The coral larvae (planula) live in the plankton for several days until finding a suitable area to settle; unfortunately, very few larvae survive to settle and metamorphose into new colonies. MORE