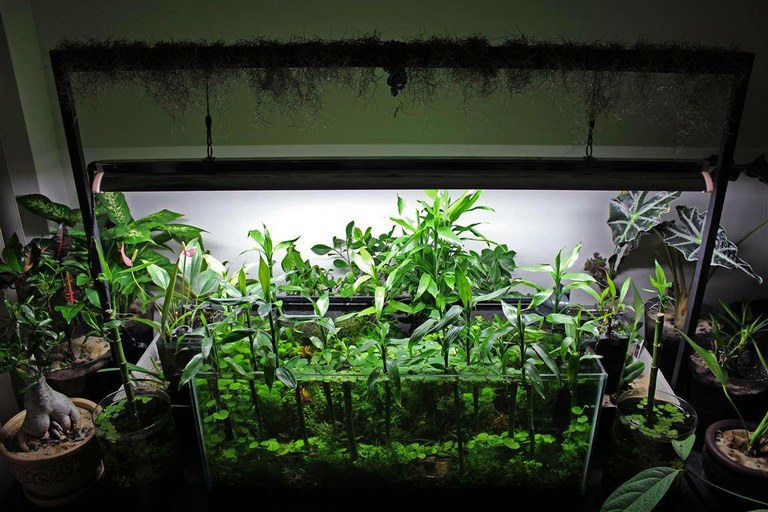 
This featured aquarium article is republished (with some editorial alterations) with permission from epiphyte.  The original article article appears in Planted Space.  Planted Space is a new and growing community of gardeners and aquascapers.

For more photos of epiphyte’s flora and fauna, tank and setup or to keep up with general updates, follow his photo journal.

Dubbed a mini “rain forest” by friends coming into the apartment, epiphyte’s planted aquarium rainforest nestles into the far corner of a small living room.

The area started with a 20 gallon aquarium tank on top of two Ikea tables, then expanded to a hodge-podge of random plants after purchasing a cheap grow light to use in place of a more expensive aquarium light.  More plants soon followed.

Being a budget-conscious bargain shopper / grad student, our member epiphyte managed to keep the aquarium setup itself to just over $100.  In contrast, a decent LED aquarium light alone can run over $200.

The cost of plants was marginal; Some were purchase from nurseries or chains, but epiphyte procured a lot of the aquatic flora from other hobbyists, just a few stems each, and they quickly grew to overtake the tank.

The tank and plants are settled in the far corner of a small apartment living room, situated by a north facing floor-to-ceiling window, under a single 54W T5HO grow light.

This is how the space currently looks, with a variety of simple foliage plants surrounding the tank, and overhead hangs a few strands of Spanish moss.  Sitting in the back is a gardenia bush that has been flowering for over a month, carrying a delicate scent throughout the entire apartment.  On the front left is a desert rose, front right is an anthurium, followed by a terrestrial orchid.  You’ll note that anthurium and orchid clippings are also growing inside the filter box.

A number of plants can grow partially submerged in water, including most of epiphytes’ (anthurium and orchid in this case).  In fact, with the moving water and a constant supply of nitrates supplied by the fish, they thrive in the tiny filter boxes.

Many plant varieties love the humidity surrounding an aquarium tank, I’ve never had a gardenia flower for so long as the one in this setup.

The first thing you’ll notice inside the tank is scattered stems of lucky bamboo (Dracaena sanderiana).  You may see these being sold inside aquarium stores as aquatic plants, but they are not.  Lucky bamboo are extremely hardly and can survive being fully submerged for many months, but to keep the plant alive, the leaves must be above water.

What the tank looked like on day 0. Hideously barren.

The tank in its prime. About 2 months into planting.

Starting a tank and watching it grow in that first month is always the most fun (and addictive).  The substrate is just dirt capped with gravel and black sand.  The tank is overfiltered with 2 HOB filters and 1 recycled filter off an EHEIM Aquastyle.  The dirt took a while to settle down, causing odd nitrite/nitrate spikes every other week, and I did lose several fish because I jumped the gun early on.  After 1.5 months everything stabilized.

The light originally used was off the same EHEIM Aquastyle, an LED that only lit half the tank.  After the Hydrofarm Grow Light was set up, the plants all on sides of the tank started taking off.   Very little fertilizer has been used for the tank:

The tank today requires very little maintenance.  Feeding is done daily or every other day, and the water is changed once a month or every other month.  Parameters in this tank have always been stable, 0 Ammonia, Nitrites, Nitrates, and TDS never exceeds 350.

A collection of clippings and floaters were received from other hobbyists online, and epiphyte doesn’t recall a single plant not surviving.  Aquatic plants are much easier to plant and grow than their terrestrial counter parts, basically take a stem, stick it in the substrate, add light and you’re good to go!  He’s lost track of how many plant varieties are in here, but the following list gives a good approximation:

As for fish, the tank started out with 3 panda platies (pandas and bamboo, get it? ;)).  Then, several corydoras (pygmaeus and habrosus), otocinclus were introduced.  As for inverts, about 10 red cherry shrimp and a handful of malaysian trumpet snails were added.  Ramshorn, bladder snails have also made it in as hitchhikers from plants.  Throngs of copepods, amphipods, ostracods, cladoceras, and nematodes are also throughout the substrate.  A fairly accurate number:

Every creature has a function, and contributes to keeping the little ecosystem somewhat sustainable.  Baby inverts act as fish food when feeding is infrequent.  The shrimp and snails break down uneaten fish food, dead plant matter, or even dead fish; the worms liquefy all kinds of waste; then the plants take up the ammonia and nitrates and grow!