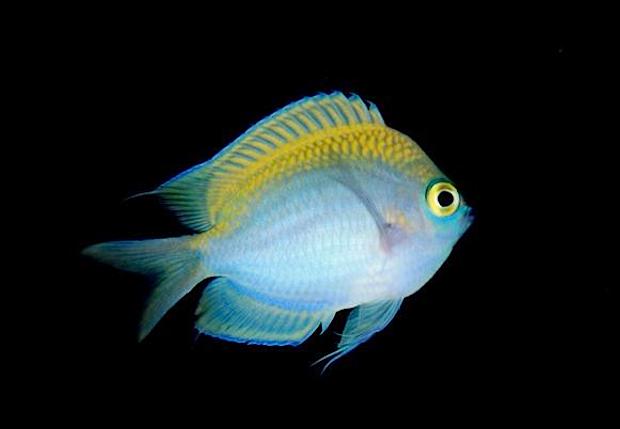 The circumtropical genus Chromis is a ubiquitous icon of any coral reef, and can be found anywhere from sun speckled coral gardens to lung compressing depths in the mesophotic twilight zone. Despite their near abrasive presence both in the field and in the aquarium trade, not much is known about the genus collectively. With increased deep water exploration, it’s becoming clearer that the humble Chromis is equally comfortable in soul sucking depths as they are in the shallows.

In the grand scheme of pomacentrid fish, Chromis represents the largest genera with over 80 valid species, although there is no doubt that this number will only continue to grow in the decades to come. Members of this genus are some of the few damselfishes to inhabit deep waters, with a couple of species pushing the boundaries and limits of even the most professional rebreather divers.

In the relatively recent year of 2008, five new species of Chromis from the Western Pacific were described in a single publication. These represent some of the deepest known species yet, providing a glimpse of the genus’ diversity in the mesophotic zone. It also provides a rather interesting look at the seldom seen, whimsical side of ichthyologists. Scientists are known to sneak clever humour into their work, often in the form of anagrams or witty phrases. The species described in this paper were named in order of the first five letters of the english alphabet in chronological order, starting with Chromis abyssus, brevirostris, circumaurea, degruyi and earina. In other words, A,B,C,D,E!

Today on epithet etymology, we will explore the witty humour of the Chromis quintet. How Chromis got its name is somewhat of a mystery. There is a haze of uncertainty that surrounds this one, and to the best of my knowledge, Chromis was named in reference to the greek word “chroma“, meaning color. This is, however, debatable. And since the genus Chromis was erected more than a century before I walked this earth, it’s true etymology is perhaps hidden amongst dusty, silverfish encrusted literature. 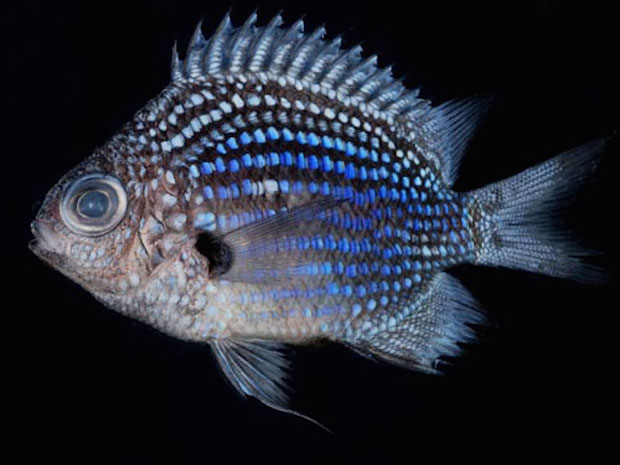 The holotype of this handsome species was known from Belau Islands in Palau, at a depth of 110m. Apart from the type location, this species has also been observed at 120-150m in Manado, Sulawesi. C. abyssus is fuliginous grey with a large obsidian spot on the pectoral fin base. The body is heavily striated in rows of brilliantly metallic blue spots, each one corresponding to the center of a single scale.

The species was named “abyssus” in honour of the documentary “Pacific Abyss”, in which the type specimens were collected during filming. Despite its specific epithet, this species is not found in the abyssal zones, but rather, restricted to the deep waters of the mesophotic reefs. As such, the common name “Deep Blue Chromis” is used to negate any confusion. The species frequents deep water rocky outcrops where it stays close to ledges and substrata, often in company of Chromis brevirostris, C. degruyi and C. earina. 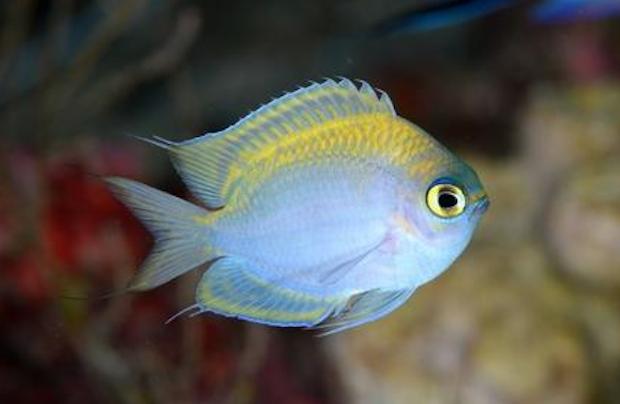 The cartoonish look of C. brevirostris is owed to its comically flattened face. Photo credit: Trimma.net.

Chromis brevirostris was first known from the Caroline Islands at a depth of 100-103m. Since then, the species has been recorded across much of Micronesia, Melanesia, and west to Bali. This species is restricted to very deep waters in all locations, but, although rarely, can be found at 60m. The epithet “brevirostris” is an amalgamation of the latin words for “short” and “snout”, owing to the species’ blunt face. This beautiful fish is bluish white overall with a row of gold-edged scales running along the dorsum. The soft portion of both dorsal and anal fins are equipped with a pair of filamentous extensions, and so are the caudal lobes.

C. brevirostris frequents deep reef slopes and drops offs, generally at a depth of 90-120m. In its habitat, the species is not uncommonly found in aggregations of up to a dozen individuals. C. brevirostris, despite its unusual morphology, share similar meristics with five other species. They are C. earina, C. alpha, C. nigroanalis, C. ovatiformis and C. pembae. These species are found only in excess of 40m, and together, they are informally treated as the Chromis alpha complex. 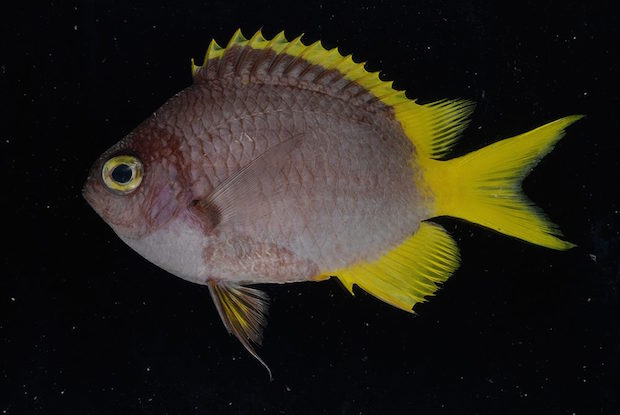 Chromis circumaurea was known from the Caroline Islands at a depth of 98-100m. This species was first observed in the Marshall Islands at 120m from a submersible, and was subsequently collected from Yap in 2007. In Chromis circumaurea, the body is uniformly mahogany to chocolate brown. The distal portions of the dorsal spines are tipped in yellow, edging closer to the inner portions of the fin as it travels toward the posterior region. The entire soft dorsal fin, caudal and anal fin are colored in a rich goldenrod, earning the species its specific name of “circumaurea“, which means “encircled in gold”.

C. circumarea is found throughout much of Micronesia, from the Marianas to the Marshalls, to the Caroline Islands and Pohnpei. It frequents steep drop offs of up to 120m where numerous individuals may be found in close aggregation. In Pohnpei, this species has been observed at 450ft in near vertical drop offs in the presence of Odontanthias and Grammatonotus. 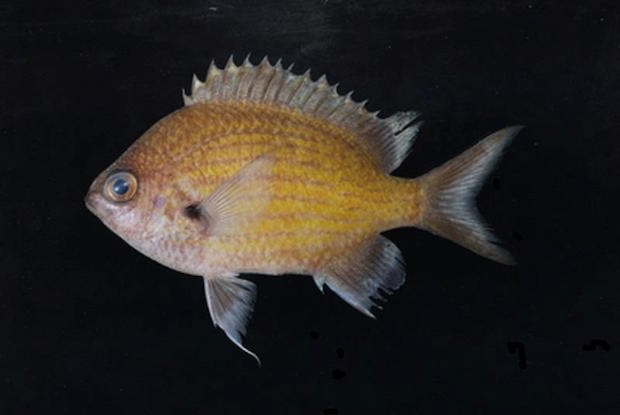 Chromis degruyi was first known from Kayangel Atoll in Palau at 85m. This species is olivaceous to brownish-yellow with nine thin lavender-grey lines travelling horizontally across the body. The middle four to five stripes are extrapolated to the caudal peduncle, and a small black spot is present on the upper pectoral axil. Chromis degruyi is uncommon in the wild, and frequents the same deepwater habitats as the preceding species at depths ranging from 85-120m.

C. degruyi is restricted to the Caroline Islands, where it is found throughout the various island groups. Its range, however, is likely more extensive than currently known. The specific epithet “degruyi” was named in honour of Michael V. DeGruy, whose enthusiasm and determination in obtaining the type specimens were greatly appreciated by the authors penning its description. 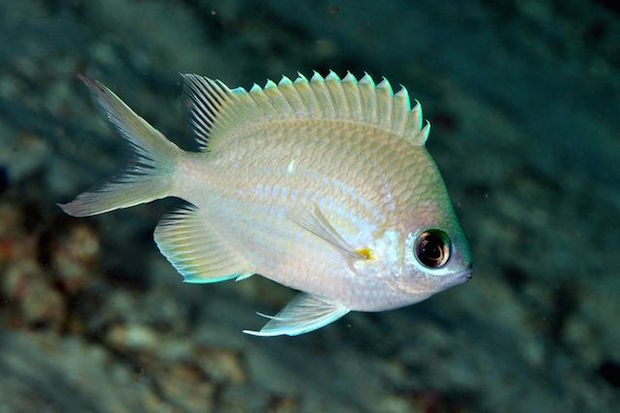 Chromis earina is the final member of this deepwater quintet. This species was known from Espiritu Santo, Vanuatu, at a depth of 116m. Chromis earina is a faint seafoam to turquoise uniformly with a variable, vertically oriented spot on its body. The body is weakly decorated with four to five barely nascent stripes in pale blue. A malachite rim encircles the lower orbital limit, where it sometimes travels to the upper lip and diffuses posteriorly into the nape.

Chromis earina is named after the greek word “earinos”, which means “the color of spring”, in reference to its pale green body coloration. It is widely distributed throughout the tropical Western Pacific, from Puluwat westwards to Palau, south to Papua New Guinea, Vanuatu and Fiji. This species is absent from the American Samoa, Line Islands and French Polynesia. A single specimen was collected in Misool, Raja Ampat at 75m, putting this species in the geographical ecoregion of West Papua. It has not been found further west in Indonesia proper, but it is not unlikely, considering its penchant for deep waters and the ensuing limitations in documentations.

Together, these alphabetically named species make up the big five of the mesophotic realm. It’s quite likely that more Chromis species are awaiting discovery down in those depths, further fuelling the enigmatic voodoo that surrounds this genus. Few genera are able to straddle the divide between light and dark, but Chromis seem to handle this exceptionally well, from Chromis viridis to Chromis struhsakeri, and everything in between, you’ll find a Chromis in the A-Z of reef exploration.