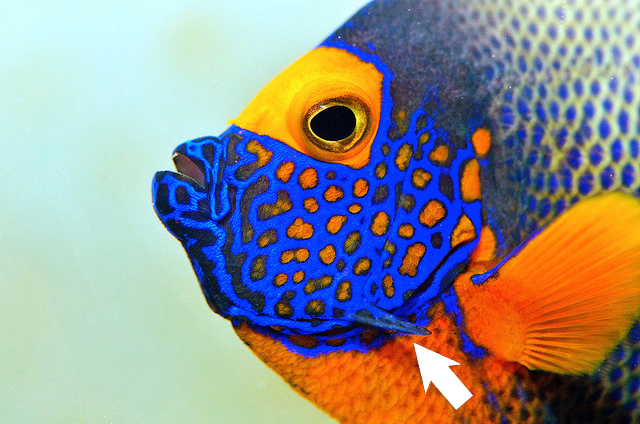 Pomacanthus xanthometopon, the blue face angelfish. The epithet “Pomacanthus” is translated from the greek words meaning “cover-thorn”, in reference to the large opercular spine (in white) present in all angelfish species.

Good March everybody. After last week’s foray into some rather unbecoming “reef” fishes, we’ll make a Uey back into familiar territory. Literally nothing is more familiar to the casual aquarist than angelfishes and surgeonfishes. Today’s epithet etymology elucidates the generic meaning behind these evergreen staples, starting of course with the ever popular members of Pomacanthidae.

The family Pomacanthidae houses about 89 species of angelfishes in 7 genera, all of which can be characterised by having at least one prominent opercular spine on their gill covers. This feature comes in handy, especially when trying to diagnose an angelfish from the rather similar butterflyfish. This may seem superfluous to aquarists and reef enthusiasts, but angelfishes are very often misidentified in the field by a novice. Even the iconic Moorish Idol appears angelfish-esque to the general public, shocking as that may seem. 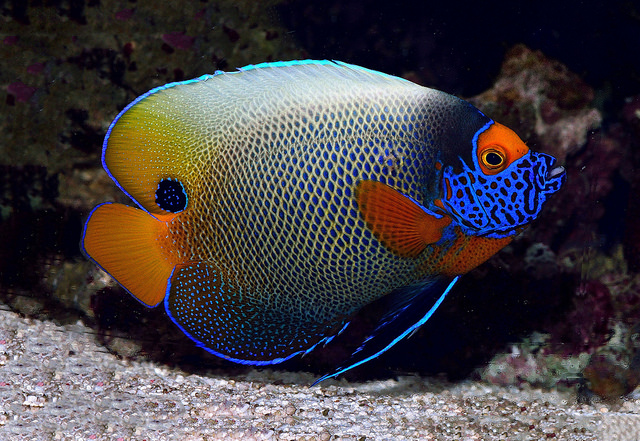 It really comes as no surprise then, that the etymology behind the genus Pomacanthus (and family Pomacanthidae) is really just a nice and literal way to describe this feature. The epithet “Poma” is derived from the greek word for “cover”, and the suffix from the greek “akantha”, which means “thorn”. When combined, the words “cover-thorn” quite nicely refer to the opercular spine on the gill covers.

Pomacanthus xanthometopon above is an example of a lovely species from the family. Its specific epithet “xanthometopon” is again rooted in greek, with “xantho” meaning yellow, and “metopon” meaning forehead. Although its taxonomic name draws attention to its yellow forehead, its common name suggests otherwise. P. xanthometopon is known colloquially as the “blue-faced angelfish”; a nonetheless interesting species that is named after both color patterns on its head, depending on which name you choose to adopt. 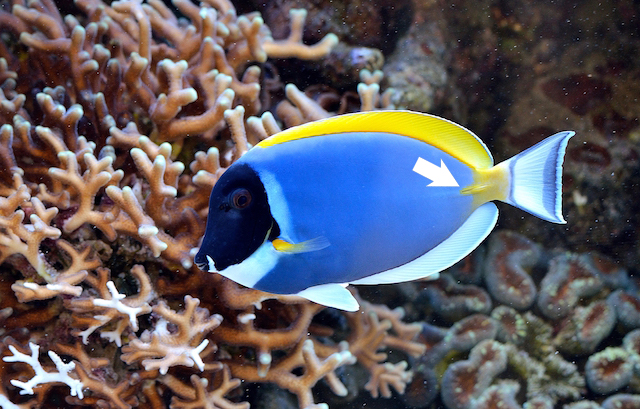 A thorny parallel can be seen in the surgeonfish family, Acanthuridae (and genus Acanthurus). Like angelfishes, the family is also named in reference to a thorn, but in Acanthuridae, this is not present on the gill cover – instead, this feature is manifested as a retractable blade on the caudal peduncle (non-retractable in the genera Naso and Prionurus). Like Pomacanthus, the genus Acanthurus (and family Acanthuridae) stems from the greek words “akantha” for “thorn”, and “ourá” meaning “tail”. Acanthurus therefore translates to “thorned-tail”. Members of this family use this as a defence mechanism. In all genera except Naso and Prionurus, the “blades” are retractable and are capable of causing deep gashes to other fish (and careless humans). For that reason, Acanthurids are more commonly known as surgeonfish, and their “blades” as “scalpels”.

An example shown here is Acanthurus leucosternon. The specific epithet “leucosternon” is the combination of the greek words “lef̱kó” for white, and “sternó” for chest (or breast). As adjectives, these words are very commonly used in other taxonomic nomenclature, some of which you’ve undoubtedly stumbled upon before. The greek word for white is used in various other things such as leucocytes (white blood cells), leucocheilus (white lips), leucokranos (white crown) etc. Sternó is perhaps more widely recognized. Our chest bone, the sternum, is practically a literal translation from its greek origin.

So there you have it. Two charismatic families of reef fish with thorny names rooted in greek. In the next installation of epithet etymology, we’ll explore the ABCs of Chromis.