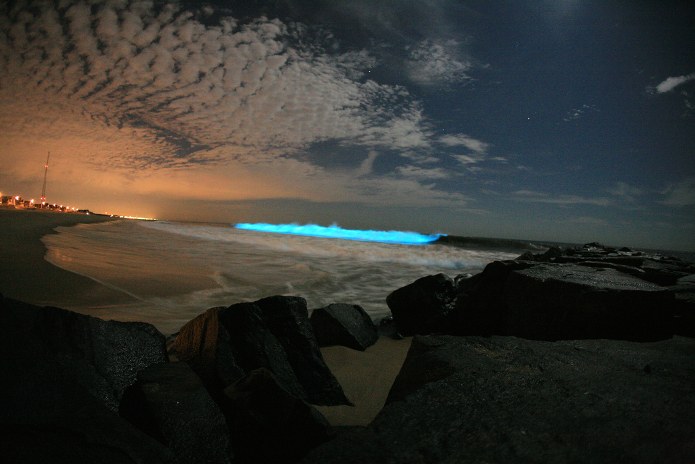 
The bioluminescent tide this past September 2011 in San Diego, CA was a beautiful sight and was captured by many amateur and professional videographers.  On this particular night, the Red Tide came ashore and began bioluminescing an intense neon-blue as the waves agitated the bacterial bloom into luminescence as can be seen from the above photograph.

It is definitely an interesting genetic trait for bacteria to have but have you ever wondered why certain marine bacteria might be bioluminescent?  An article published yesterday in The Proceedings of the National Academy of Sciences of the United States of America investigated at least one reason why this might be the case.

Researchers have long suspected that certain nonsymbiotic bacteria were bioluminescent in order to attract higher organisms to eat them which in turn helped disperse the bacteria further through growth in the guts of fish and subsequent dispersal through defecation. Up until this point this idea has been purely speculation. Margarita Zarubina, Shimshon Belkinc, Michael Ionescuc, and Amatzia Genina of the Interuniversity Institute for Marine Sciences, Israel and the Institute of Life Sciences, Hebrew University of Jerusalem, Jerusalem have finally put this hypothesis to the test in the lab.

“Bacterial bioluminescence as a lure for marine zooplankton and fish” tested this idea by growing the saltwater bioluminescent bacteria Photobacterium leiognathi in the laboratory, verifying their bioluminescence, and then feeding them to adult Artemia salina which in turn began to glow. A recirculating flume tank was then setup and equipped with a slow-moving propellor pump, an infrared light source, and a 30 cm partition in the tank to house the test specimen: a Ringtail cardinalfish (Apogon annularis).  Luminous and non-luminous Artemia were then fed to the fish in a darkened room and the capture rate of the Artemia was monitored using an infrared camera.  Their results indicated that glowing Artemia were highly susceptible to predation by night time feeding fish whereas their non-glowing counterparts are not.

In the below video, you can see footage of the high capture rates of glowing Artemia:

Apogon annularis detects and efficiently consumes glowing Artemia in the dark. These Artemia became glowing by contacting and ingesting bioluminescent bacteria. Infrared light was used to illuminate the flume for video recording. The lower part of the image (below the dark bar) shows the flume’s working section as viewed from the side. The upper part shows the working section as viewed from above, through a 45° inclined mirror.