The Evolution and Biogeography of Pseudojuloides: Part 4

Two poorly studied and seldom encountered species are known in this group, both of which make rare appearances in the aquarium trade. P. mesostigma is the more well known of the two, with populations documented throughout the West Pacific. The males of this species possesses a teal belly and a dark back extensively covered in light blue reticulations. A prominent black blotch extends roughly from the middle of the dorsal fin to the midline of the body. The dorsal fin is a bright yellow in the spinous portion and clear posteriorly. [Note that atavai has a superficially similar dorsal fin, but lacks the medial spot and possesses a small anterior smudge instead.] The caudal fin is entirely black, save for a thin blue band on the posterior margin of the black, followed by a colorless hyaline tip. 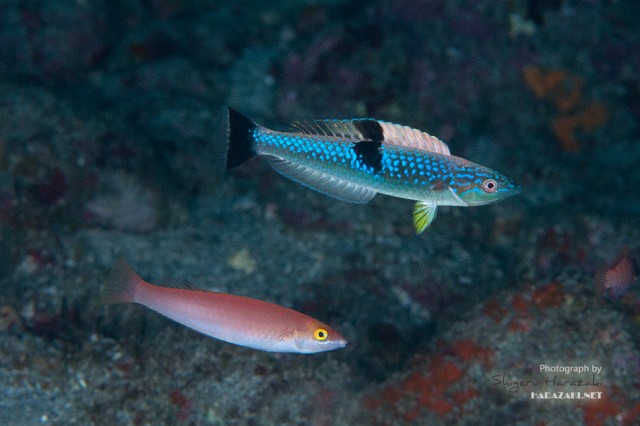 P. mesostigma male on a swim with his gal. Credit: Shigeru Harazaki

Clearly, the range for mesostigma is likely to include much of the intervening geography, but it’s unknown if this species extends into Polynesia (an unidentified species from Jarvis Island may be this species). The Japanese population is particularly well-documented by local divers, relative to the scattered reports from elsewhere in its range. Whether this is due to a regional abundance or is an artifact of Japanese ichthyophilia is impossible to say, but the latter seems more likely. The relatively deep waters (25-45m) mesostigma call home surely make it more challenging to find than shallower taxa in the genus . 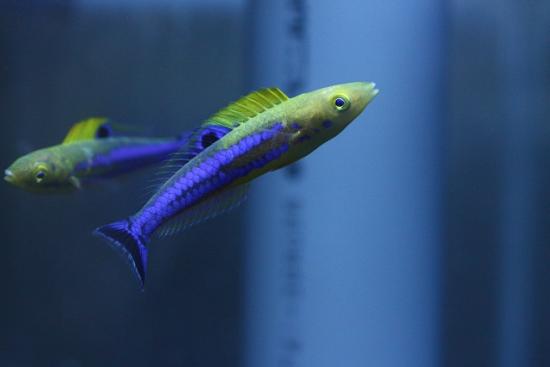 By the beard of zeus! Credit: Aqua Stage

The second member of this group, and the most recent to be described, is the evocatively named P. zeus. To date, this species is only known from Palau and the Marshall Islands at depth below 80 meters. It shares with mesostigma the yellow spinous dorsal fin and medial black spot, but this spot is particularly small in zeus and entirely restricted to the dorsal fin. Furthermore, the blue reticulations which are so prominent in the males of mesostigma are apparently absent in zeus, instead, being replaced by a pair of zigzagging, “lightning bolt-esque” blue stripes running laterally along the body from the pectoral fin base through the caudal peduncle. The margins of the caudal fin each have a triangular blue extension associated with the stripes running along the body, giving the appearance of the “scissortail” seen in the related severnsi complex. As the species’ authors playfully put it, “[T]his species is named for the Greek god Zeus, who liked to cast bolts of lightning at unsuspecting mortals, such as the physician Asclepius who became a little too presumptuous.” 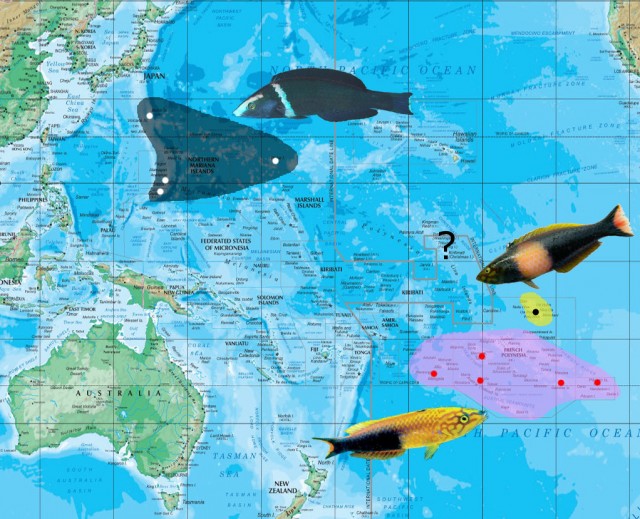 In Tahitian, atavai translates as “pretty”—an apt name for these attractive species. Their good looks are the result of several color patterns that are anomalous amongst Pseudojuloides. The most noteworthy difference is the sharply bicolored juveniles and females, which are white ventrally and red dorsally, separated diagonally by a black. In all other congeners, the juveniles and females are solidly colored or have a lighter belly that diffusively blends into the dorsal coloration. 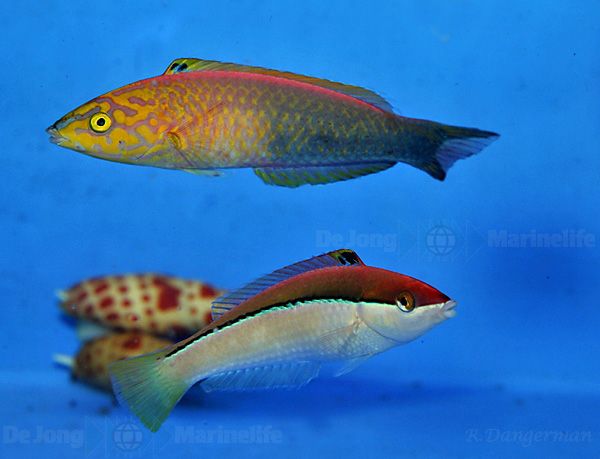 The patterning of the male head is likewise unusual, with a series of irregular brown-red reticulations on an orange background. This patterning is also found to an extent in P. edwardi, and gives a glimpse into the shared ancestry this genus has with other julidiine wrasses, such as Halichoeres and Macropharyngodon. The closest relatives within the genus appears to be the cerasinus Group, which shares a similarly broad body and an unusual black spot anteriorly in the dorsal fin.

Terminal males develops a sooty coloration, which varies markedly amongst the three known Pacific populations.Those from French Polynesia (the type locality for the species) develop this melanism only in the posterior half of the body. Specimens from the nearby Marquesas Island are similar in coloration, but differ in also having the head black, ending at a line stretching from the dorsal fin origin to the pelvic fins. Between these two dark regions is a “saddle” of scales showing the underlying base coloration. Given that another member of this genus is endemic to this isolated island chain, it seems likely that this is an undescribed species.

Another isolated population can be found in the waters around the Mariana Arc, a region present at the intersection of two major biogeographic ecoregions—Japan and Micronesia. Specimens have black extending to cover nearly the entire animal, save for two pale bands—one extending diagonally from the first dorsal fin spines to the pelvic fin base, the other extending from the mouth, to above the eye and to the rear of the head. The Northern and Southern Pacific atavai are so drastically different in the males that it can be hard to appreciate the similarities. The bicolored juveniles and females, however, elucidate the situation. Small juveniles show some regional difference as well, having far more black obfuscating the underlying red pattern. 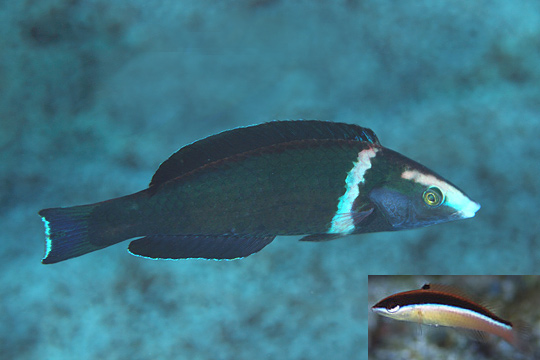 The precise limits of where these two forms occur is poorly documented. The furthest extent for the North Pacific population appears to be Guam, the Ogasawara Islands, and Wake Island. This is a highly unusual biogeography, as other species limited to the Mariana Arc are suspected hybrids from overlapping ranges of neighboring parent species. These P. cf atavai, on the other hand, are completely isolated in relation to their South Pacific brethren. Given their highly allopatric ranges and extreme color differences, it would be surprising if this population wasn’t elevated to full species rank. The possibility exists of another population in the remote Phoenix and Line Islands, as some unidentified specimens from the genus are noted in the official checklist for these islands. Still, this leaves a wide disjunction centered on the Marshall Islands.