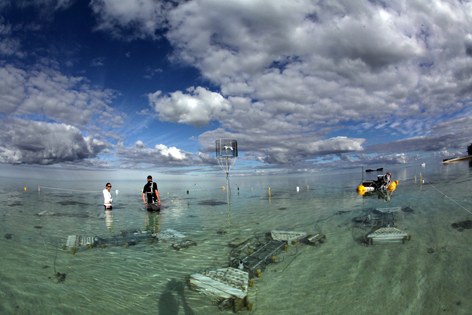 
A group of experts have agreed on ‘levels of confidence’ in relation to ocean acidification statements summarising the state of knowledge. The summary was led by the International Geosphere-Biosphere Programme and results from the world’s largest gathering of experts on ocean acidification ever convened. The Third Symposium on the Ocean in a High CO2 World was held in Monterey, California (September 2012), and attended by 540 experts from 37 countries. The summary will be launched at the UNFCCC climate negotiations in Warsaw, 18 November, for the benefit of policymakers.

Experts conclude that marine ecosystems and biodiversity are likely to change as a result of ocean acidification, with far-reaching consequences for society. Economic losses from declines in shellfish aquaculture and the degradation of tropical coral reefs may be substantial owing to the sensitivity of molluscs and corals to ocean acidification.

One of the lead authors of the summary, and chair of the symposium, Ulf Riebesell of GEOMAR Helmholtz Centre for Ocean Research Kiel said: “What we can now say with high levels of confidence about ocean acidification sends a clear message. Globally we have to be prepared for significant economic and ecosystem service losses. But we also know that reducing the rate of carbon dioxide emissions will slow acidification. That has to be the major message for the COP19 meeting.”

One outcome emphasised by experts is that if society continues on the current high emissions trajectory, cold water coral reefs, located in the deep sea, may be unsustainable and tropical coral reef erosion is likely to outpace reef building this century. However, significant emissions reductions to meet the two-degree target by 2100 could ensure that half of surface waters presently occupied by tropical coral reefs remain favourable for their growth.

Author Wendy Broadgate, Deputy Director at the International Geosphere-Biosphere Programme, said: “Emissions reductions may protect some reefs and marine organisms but we know that the ocean is subject to many other stresses such as warming, deoxygenation, pollution and overfishing. Warming and deoxygenation are also caused by rising carbon dioxide emissions, underlining the importance of reducing fossil fuel emissions. Reducing other stressors such as pollution and overfishing, and the introduction of large scale marine protected areas, may help build some resilience to ocean acidification.”

The summary for policymakers makes 21 statements about ocean acidification with a range of confidence levels from “very high” to “low”.