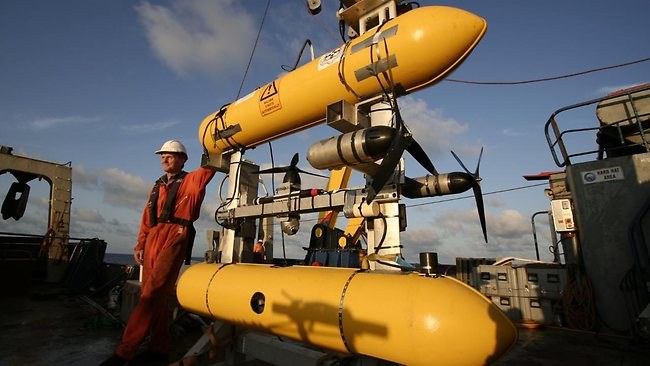 The autonomous underwater vehicle at launch


Mesophotic Coral Ecosystems: Light-dependent coral communities and their associated populations of algae, sponges and other invertebrates, and fishes, that occur in the deepest half of the photic zone (starting at 30-40 m and extending to over 150 m) in tropical and subtropical regions. This zone of diminished light is also referred to as the “twilight zone”.

We all picture coral reefs as sunbathed oasis, but reefs can actually extend (and thrive) down to great depths where sunlight barely penetrates.  In extreme environments, life adapts in unbelievable ways.  It is therefore no surprise to find some of the most exotic habitats and organisms on the planet in these rarely-explored deep sea reefs.

International researchers led by James Cook University deployed an “autonomous underwater vehicle” (in other words, a robotic submarine) to explore the Mesophotic Zone of the Great Barrier Reef.  The AUV examined three continental shelf sites off Cairns, Townsville and Mackay, documenting many potentially new species, including a multitude of sponges and corals.  The AUV captured a series of stereo images which will be stitched together to create a 3D map of the sea floor.  The AUV also collected valuable data on environmental data including “multibeam swath bathymetry, conductivity-temperature-depth, turbidity and chlorophyll.”

Later this year, another remote-operated submarine is set to explore and film (in high definition) the Great Barrier Reef, diving as deep as 650 meters (2,100 feet).  And the greatest part? The video will be part of a documentary that should air on BBC and Discovery.