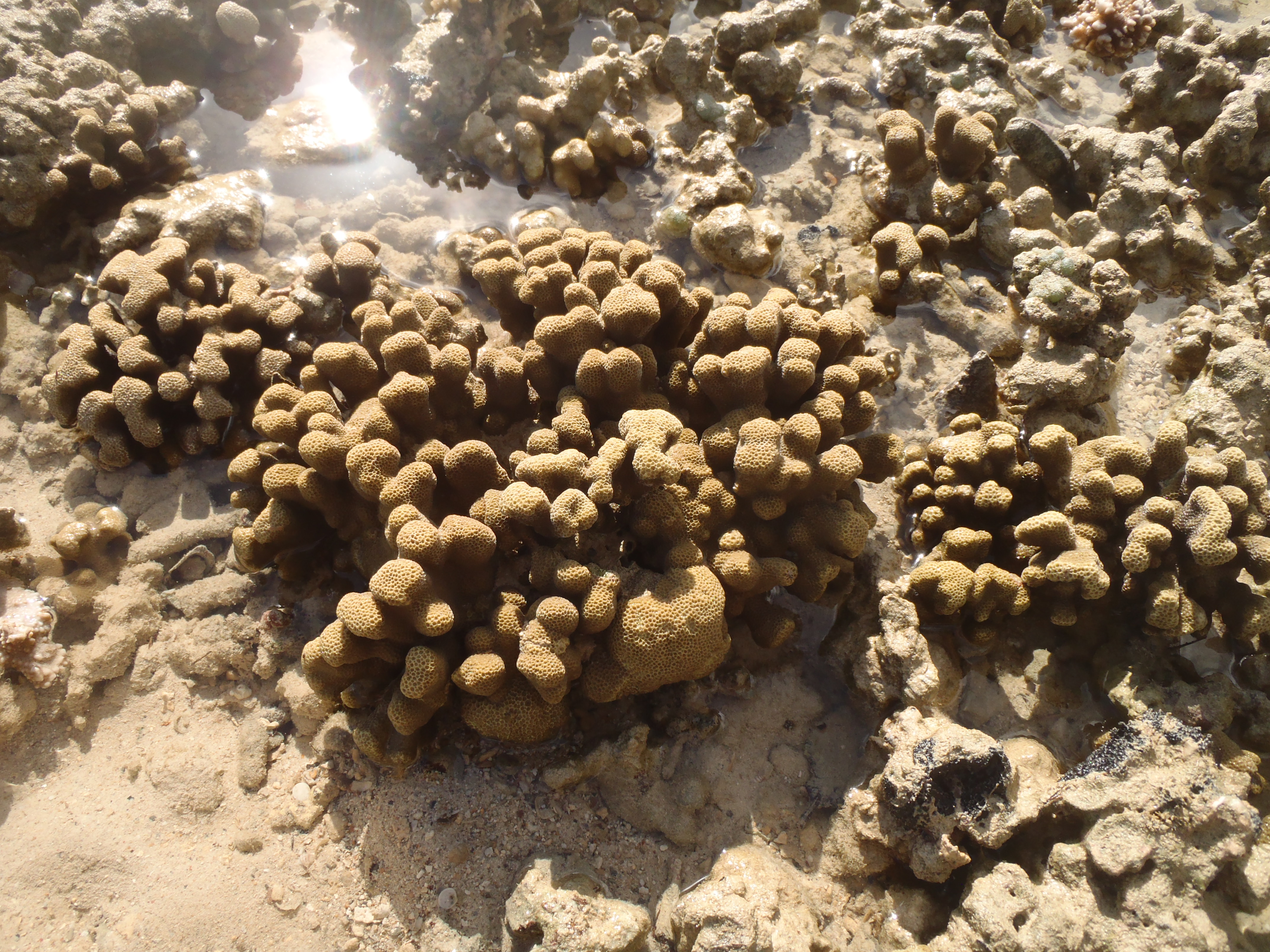 Porites compressa on the reef flat sitting high high and fry during an extreme low tide.

The Hawai’i Institute of Marine Biology (where I perform much of my research as a graduate student) is located on Coconut Island–or Moku o Loe, in the Hawaiian–in Kāne’ohe Bay on the island of O’ahu, HI. The island is surrounded by a wonderful fringing reef with a well developed reef flat.

If the planet were simply a smooth ball covered in water it would be very easy to predict exactly the size and timing of the tides. Since the Earth has land in the way of the tidal bulge as it moves across the planet and overall complex topography below the surface of the water, the ocean sloshes around in complex ways tides are distinctive around the planet. As a result, some places have much bigger tidal ranges whereas other places have smaller tidal ranges; some places have two high and two low tides per day whereas other places have only one of each (one high and one low slosh such that they cancel each other out). In general we are very good at predicting the tidal regime most places, but it’s also possible for things like local winds to blow water into an area or out of an area, making the appearance of the tide either higher or lower than normal.

At HIMB we usually get a few really low spring tides per year. Usually this means that the reef flat is covered by just inches of water, and sometimes the highest parts of the reef flat actually become exposed to the air for a short time at low tide. A few months ago I witnessed the lowest spring tide I’ve seen in the last three years at HIMB. As you can see in the photographs and video, the entire reef flat was way out of the water as were many of the corals that live there. During this event the corals on the highest parts of the reef flat were out of the water and exposed to the air for at least 2 hrs. During this time they were also getting backed by the sun and desicated by the wind, without so much as a splash of relief from the ocean for many of them.

I’ve been observing the areas that were exposed the longest over the last few months, curious how the corals would respond. Honestly, I expected much if not most of the coral that was exposed would end up dying. Let me reiterate, they were baking in the sun and getting hit by strong wind out of the water for at least 2 hrs. I sure wouldn’t try that at home.

Firstly, I did see some coral die in the days following the extreme low tide. This death was restricted to the corals Montipora capitata and Pocillopora damicornis and only the parts of the colonies that were exposed the longest ultimately died. Parts of the same colonies that were exposed for shorter periods survived and now, a few months later, the surving portions of the colonies look perfectly healthy and normal. However, the really dominant coral on the reef flat is Porites compressa. From talking with others and from experience I know that this coral is somewhat tolerant of dessication. Often, after severe stress, this coral will die back and then begin rapidly regrowing from residual tissue which survives deep in the skeleton–the so-called Phoenix Effect. That’s what I expected to see–most of the coral to die, but with eventual regrowth from residual tissue. Instead, I saw nothing at all. When the tide came back in the corals released a lot of mucus, and that was it. I saw no die back of the Porites compressa at all that I could find. If I may say so, that is pretty darn impressive.

In some parts of the world aerial exposure at low tide is more common. For instance, much of the Great Barrier Reef tends to have much larger tides than we have here in Hawai’i and some reef flats full of corals become exposed for a time at low tide. I’ve even seen aquariums where the aquarists purposefully recreates this sort of low tide situation, letting their corals sit out of water for a time. However, it’s important to keep in mind that many corals simply don’t tolerate this kind of exposure, and as a result you won’t find them on intertidal reef flats. Damp shipping a coral in a bag is one thing, surviving under blazing sunshine and desicating winds is quite another. It’s also worth nothing that even though the Porites compressa on the reef flat here seemed to survive just fine, this is much more stressful environment than in just slightly deeper water on the reef slope. The coral cover on the reef flat is perhaps 5-10%. Just a few feet away on the reef slope, an area that never becomes exposed at low tide, the coral cover is 50-100%.

Clearly events like these are stressful to the corals and can certainly kill some of them. A similar event a few decades ago happen to coincide with a major storm and left pretty much everything on the reef flat dead (corals seem not to like sitting in fresh water, go figure). However, their capacity to survive under the conditions I observed is still nothing short of incredible.

Below are short videos of the reef flat at low tide and again the same location at high tide. 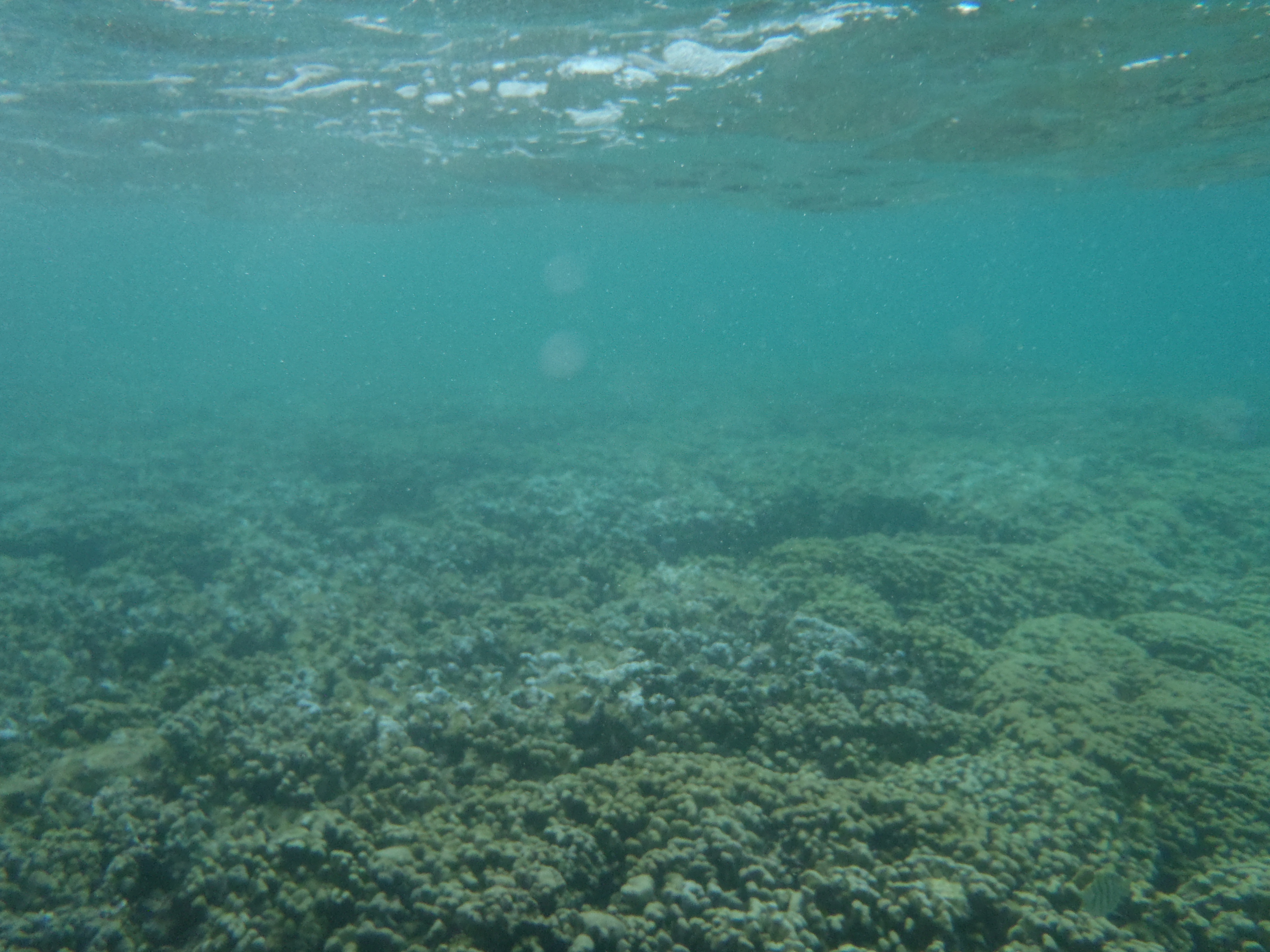 An underwater view of the reef flat at high tide. 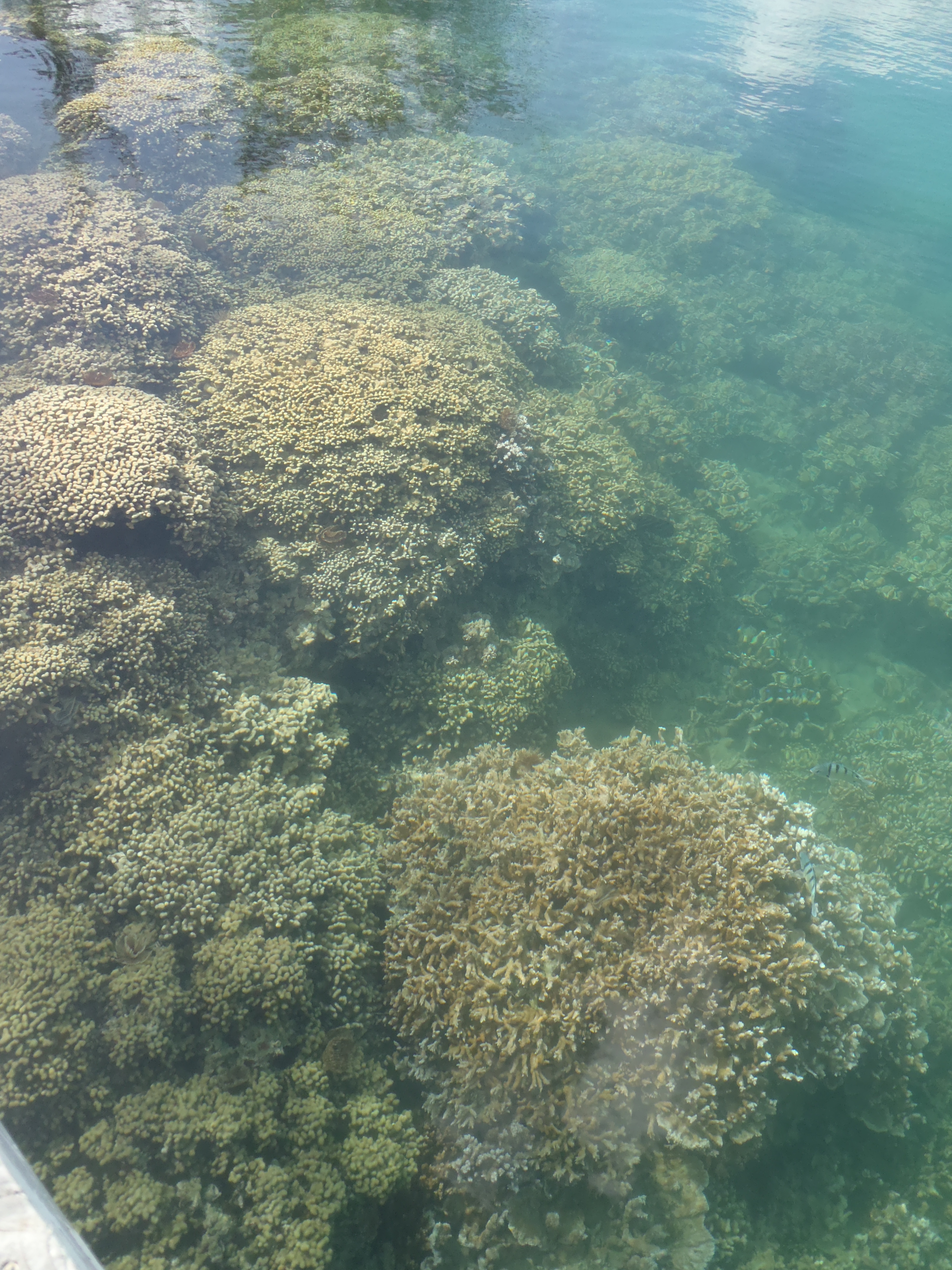 While coral cover on the reef flat is only 5-10%, on the subtidal reef slop just a few feet away coral cover approaches 100%.