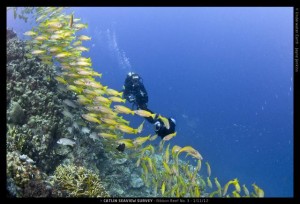 So a dive course costs a fair penny and that claustrophobia and fear of sharks that you have is a bit of a thing to get past but hey, why not go diving?  Well, the answer is simple…you don’t need to anymore, thanks to Google Street View.

Google Street View has partnered with scientists to create high resolution 360 degree panoramas of the world’s coral reefs.  In September last year, Google added the very first underwater panoramic images to Google Maps, calling it “the next step in our quest to provide people with the most comprehensive, accurate and usable map of the world.”  Six of the ocean’s most incredible living coral reefs from Australia, the Phillipines and Hawaii can now be viewed.

Specialized cameras for shallow water as well as deep sea are used to get the photos and then these are analyzed using advanced image-recognition software to monitor the coral and other sea creatures (the same technology that allows computers to pick a face out of a photo of a crowd).  The scientific team taking these breath-taking images aims to carry out a rapid assessment of the reefs around the world and create a scientific baseline record with which to monitor global change….and let the average Joe Blogs come along for the ride via Google.