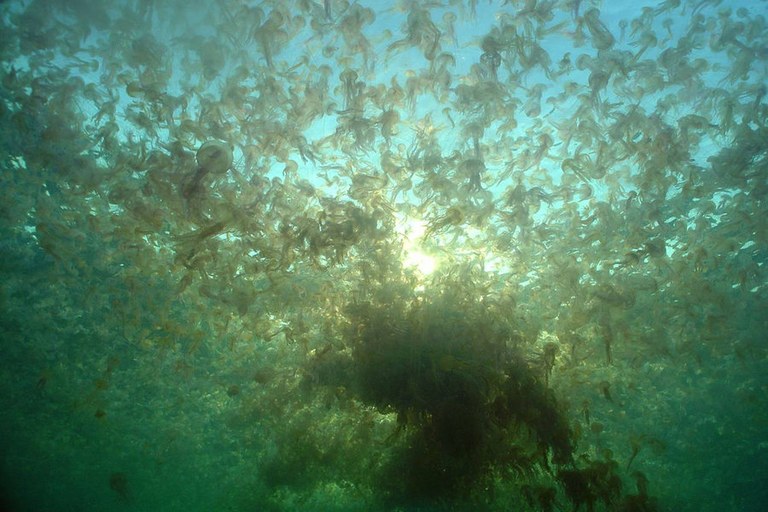 
How much more carbon dioxide (CO2) will the oceans be able to take up? To find out more about the efficiency of this service, scientists estimate the sinking velocities of organisms involved in the biological pump. Increasing numbers of gelatinous plankton might help in mitigating the CO2 problem. In field and laboratory experiments scientists from GEOMAR Helmholtz Centre for Ocean Research Kiel have shown that dead jellyfish and pelagic tunicates sink much faster than phytoplankton and marine snow remains. Jellies are especially important because they rapidly consume plankton and particles and quickly export biomass and carbon to the ocean interior.

The oceans absorb about 25 percent of the carbon dioxide (CO2) emitted by human activities. Since the industrial revolution, they have taken up about half of the man-made CO2. Billions of planktonic organisms, too tiny to be seen with the naked eye, make this valuable service possible: When carbon dioxide from the atmosphere dissolves in seawater, various species convert it to organic carbon and other organic components during photosynthesis. Jellyfish and pelagic tunicates live on smaller plankton and thus consume organic carbon. When they sink to the seafloor at the end of their life cycles, they take the carbon from the surface waters with them, provide it as food to organisms at the bottom or store it in deep water layers after decomposition. As a result, more CO2 can be dissolved in the oceans. Additionally, calcifying organisms incorporate the inorganic carbon in their calcium carbonate shells directly. They also contribute to the biological pump.

To assess the efficiency of the biological carbon pump, data on sinking velocities of the different species are necessary. Together with colleagues from Germany, Spain, the United Kingdom and the United States, Dr. Mario Lebrato, Biological Oceanographer in Prof. Andreas Oschlies’ group at GEOMAR Helmholtz Centre for Ocean Research Kiel, conducted field and laboratory experiments with gelatinous plankton remains. Their latest article in the international magazine “Limnology and Oceanography” describes for the first time the sinking speed of organic remains from jellyfish and pelagic tunicates. Together with a previous article in the same journal that calculated biomass export efficiency for these organisms for the first time, these new data allow robust estimates of global carbon export associated with gelatinous plankton.

For their experiments, the scientists collected different species of scyphozoans (true jellyfish), ctenophores (comb jellies), and thaliaceans (salps) in the Baltic, the Mediterranean, the Atlantic and the Southern Ocean. The sinking process was observed and filmed in large transparent cylinders filled with seawater at OceanLab Bremen by Dr. Pedro de Jesus Mendes. Later the proportion of organic carbon and nitrogen of the dry biomass and biomass weight were measured. The work was supported by the European Project on Ocean Acidification (EPOCA), the Kiel Cluster of Excellence The Future Ocean, the German project on ocean acidification BIOACID (Biological Impacts of Ocean Acidification), and the US National Science Foundation Office for Polar Programs.

“The sinking speed of jelly remains is much, much higher than what we expected, about 500 to 1600 meters per day”, Lebrato sums up. “And, what puzzles researchers working on the biological carbon pump: it is higher than that of non-calcifying phytoplankton and marine snow, the main sinking particles and organic carbon sources to the ocean interior”. Fast sinking means that the biomass and its constituents reach the deeper ocean layers without major degradation, where microbial decay releases CO2 that can be stored without direct contact with the atmosphere for millennia. Also, fast sinking provides high quality food resources for benthic organisms, which has already been observed actively feeding on jelly remains. On continental shelves and slope areas, biomass may reach the seabed within a day or less.

Within the studied species, scyphozoans had on average the highest carbon content (26.97 percent), followed by thaliaceans (17.20 percent), and ctenophores (1.40 percent). The jelly carbon content is lower on average than that of phytoplankton or marine snow. But their large populations, occupying at times hundreds of square kilometers in the oceans, combined with a high sinking speed, can deliver large carbon quantities to the seabed.

“Our dataset provides an initial overview and comparison for modelers and experimentalists to use in subsequent studies examining the role of jellies in carbon export and the efficiency of the biological pump”, Lebrato says. “We are continuously asked, how much organic carbon and CO2 do gelatinous plankton sink worldwide, whether their export capacities are similar to phytoplankton and marine snow. And if an increase of jellyfish in the future will enhance organic carbon export and CO2 sequestration. Until recently, few people believed that jelly organisms could play any major role in the carbon cycle, thus they have been excluded from large biogeochemical research programs. In consequence, the data available up to now are scarce and we are just starting to comprehend the fundamental properties that will allow us to better understand the role of jellyfish and pelagic tunicates in the global carbon cycle.”