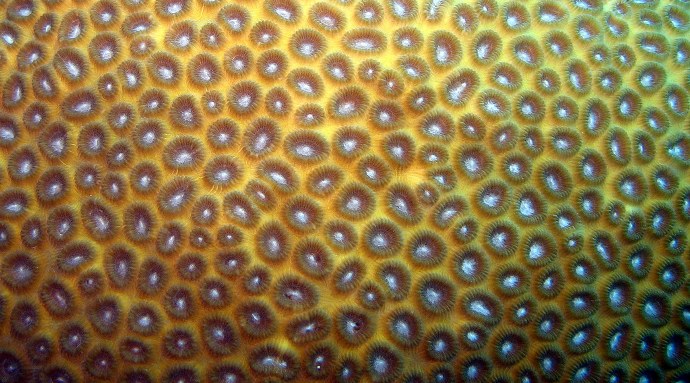 
Phage therapy is the use of bacteria-specific viruses (called bacteriophages) for treating bacterial infections. Bacteriophages are very bacteria specific (more so than antibiotics) and can be highly effective in instances where antibiotics are not practical, such as in open systems like the ocean. In addition, coral immune systems are restricted adaptive meaning that immunization with antibiotics is not possible.

What bacteriophages do is attack only those bacteria that they are specifically matched to and when found will inject their “payload” into only that strain of bacteria and kill it. A pictorial representation of a phage at work can be seen at right (Wikipedia).

White plague disease in corals is typically characterized by a clear line between healthy coral tissue and the white, exposed coral skeleton. Unlike other diseases, there is no noticeable microbial band present between the healthy tissue and the exposed skeleton.

What the researchers tested in their study was the effectiveness of using phage therapy on infected Favia favus corals in the Red Sea. They used a very specific phage (in this case Phage BA3) that would only attack the coral pathogen Thalassomonas loyana that caused the white plague-like disease found infecting these corals.

They found that Phage BA3 was effective in an open system like the ocean:

[Phage BA3] inhibited the progression of the white plague-like disease and transmission to healthy corals in the Gulf of Aqaba, Red Sea. Only one out of 19 (5 %) of the healthy corals became infected when placed near phage-treated diseased corals, whereas 11 out of 18 (61 %) healthy corals were infected in the no-phage control.

This was good news as this it was the first time that this kind of therapy was shown to be an effective means of controlling white plague-like disease using phage therapy in an open system.

For those of you that are concerned about dumping bacteriophages into the open ocean, sea water is one of the most abundant sources for phages and virions with counts up to 9×108 virions per milliliter.