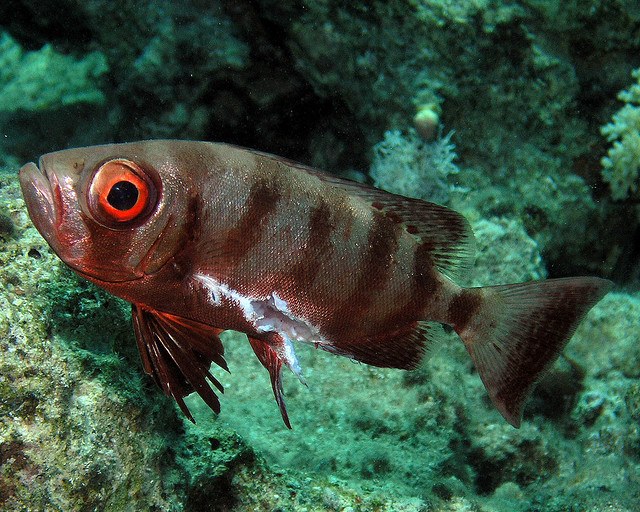 
Fear has a name, and it’s Chondroitin

Like out of a scene from the movie Batman Begins, fish release a substance into the water when they’re injured, scaring other fish nearby.  This frightening chemical is thought to help fish sense danger so they can flee to live another day.  Scientists used to refer to this mystery chemical simply as “Schreckstoff” (German for “Scary Stuff” … Germans have the coolest words!) because they had no idea what it was.

After studying zebra danio, researchers have now identified the chemicals responsible for this alarm signal; It’s a mixture of compounds containing a sugar known as chondroitin sulfate.  Chondroitin is found in fish skin, and researchers believe an enzyme triggers its release when a fish is injured.  They also theorize fish have evolved specialized neurons that are highly sensitive to this sugar.  Researcher Suresh Jesuthasan says “This region of the olfactory bulb (the part of the brain that processes odors) has unique projections to higher centers of the brain so there may be a special circuit mediating aspects of the innate fear response.”

However, the mystery isn’t totally solved.  Some fish are sensitive to the “injured scent” of other species while others exhibit less alarm response.  This suggest that there are several “flavors” of chondroitin that affect different species differently.

Aquarist as well as wholesalers and retailers should remove injured fish from aquariums containing other fish to reduce stress levels (and to treat the wounded fish).  Otherwise, all your fish will be swimming in fear … literally.