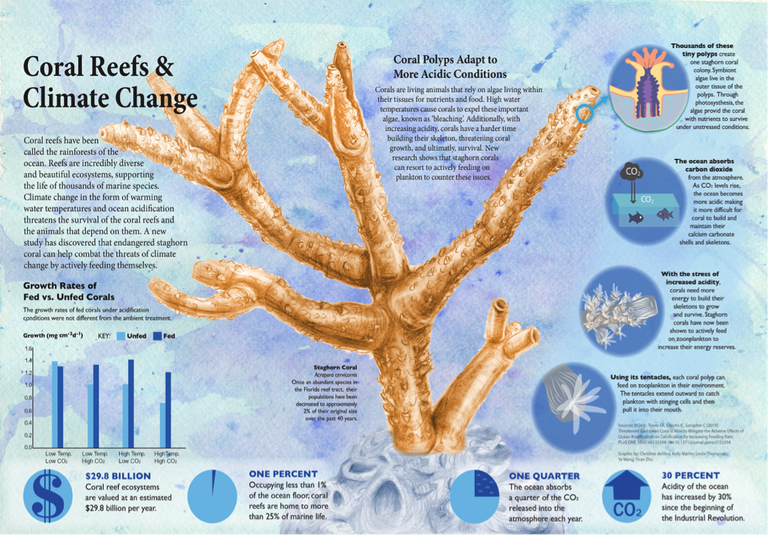 Click on the image for a larger and clearer version of the infographic.


From the University of Miami Rosenstiel School of Marine & Atmospheric Science:

Most people know the health benefits of taking daily supplements, but what about endangered corals? A new study led by University of Miami (UM) Rosenstiel School of Marine and Atmospheric Science researchers found that the critically endangered Staghorn coral may benefit from supplemental nutrition to mitigate the adverse impacts of global climate change. The results are the first to document that an endangered coral species, which was once found widely throughout South Florida and the Caribbean, can buffer the effects of increased CO2 in the ocean by increasing feeding rates.

“Our study shows a pathway to resilience previous unknown for this particular species, which was once a dominant species in South Florida,” said UM Rosenstiel School Ph.D. student Erica Towle, lead author of the study. “This has implications for how we care for and where we out-plant Staghorn corals back onto reefs to give them the best chance for resilience possible in the future.”

The research team separated eight genetically diverse colonies of Staghorn coral, Acropora cervicornis, into two groups – fed or unfed – and exposed them to elevated temperatures (30°C), a level just below the mean bleaching threshold in the Florida Keys, increased carbon dioxide concentrations (800 ppm), the CO2 levels predicted for 2065, or both (30°C/800 ppm), for eight weeks. The “fed” group was given a supplemental diet of dried zooplankton powder twice a week.

The researchers then analyzed the feeding rate of both groups by measured the amount of prey, a live rotifer species Brachionus plicatilis, each coral captured per hour and lipid content, an indicator ofenergy storage.

They found that the fed corals were able to maintain normal growth rates at both elevated temperature and elevated CO2, while unfed corals experienced significant decreases in growth compared to their fed counterparts. The results revealed that temperature, CO2 and feeding each had significant effects on the coral’s growth rate.

“For many years we have known the some types of symbiotic algae can convey climate change resilience to corals,” said co-author Chris Langdon, UM Rosenstiel School professor and chair of marine biology and ecology. “This study shows that behavioral and possibly physiological differences in the animal, which is half of the coral-algal symbiosis, can also convey resilience and not just to climate change but also to ocean acidification.”

Caribbean coral reefs are in severe decline due to global climate changes, including increasing temperatures and CO2 concentrations, as a result of increased fossil fuel burning. Increased atmospheric carbon dioxide is absorbed by the ocean water, causing a decline in the pH of seawater, a condition known as ocean acidification.

“In this study we found that the threatened coral, Acropora cervicornis, was able to increase its feeding rate and stored energy reserves when exposed to high CO2 conditions at 26°C or 30°C and mitigate reductions in calcification that caused significant decreases in growth rate in unfed corals,” according to the authors.

Only two percent of the Staghorn coral population remains in the Florida Reef Tract, so this is really one of the few ‘good news’ stories we’ve had recently about corals and climate change,” said Towle.

The study, titled “Threatened Caribbean coral is able to mitigate the adverse effects of ocean acidification on calcification by increasing feeding rate,” was published in the April 15th issue of the journal PLOS ONE. The paper’s co-authors include: Erica K. Towle and Chris Langdon of the UM Rosenstiel School of Marine and Atmospheric Science and Ian C. Enochs of NOAA’s Atlantic Oceanographic and Meteorological Laboratories in Miami. Funding for this study was supported by MOTE Marine Laboratories “Protect Our Reefs” Grant (#POR-2012-22) to EKT (http://mote.org/support/ protect-our-reefs) and by the Mohamed bin Zayed Species Conservation Fund (#12054710) to EKT (http://www.speciesconservation.org/). The funders had no role in study design, data collection and analysis, decision to publish, or preparation of the manuscript.