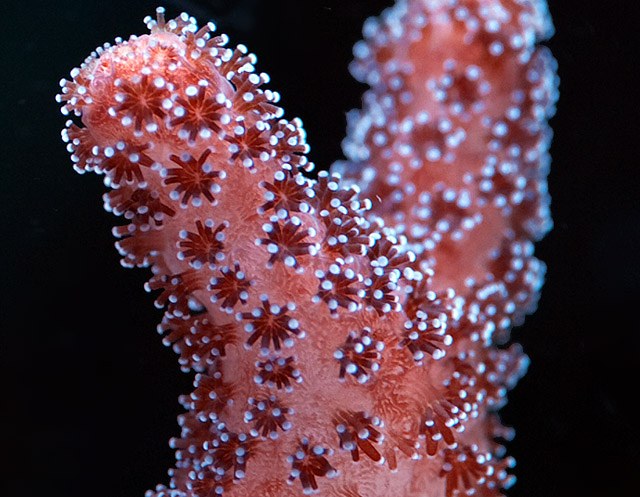 SPS corals have mouths for a reason.


Feed your coral.  Feed it!

The research showed that Pocillopora fed the most brine shrimp yielded not only the best growth and survival rates but also the best return on investment (since brine shrimp is extremely cheap).  Essentially, no matter how much the scientists fed the Pocillopora, the gluttonous coral craved even more food and grew at a non-linear, almost cubic rate (e.g. the second brine made the coral grow faster than the first, ad naseum).  Sure, at some point the rate of return would have reversed, but this research shows the voracious of corals starting at their infancy.

Size-dependant mortality influences the recolonization success of juvenile corals transplanted for reef restoration and assisting juvenile corals attain a refuge size would thus improve post-transplantation survivorship. To explore colony size augmentation strategies, recruits of the scleractinian coral Pocillopora damicornis were fed with live Artemia salina nauplii twice a week for 24 weeks in an ex situ coral nursery. Fed recruits grew significantly faster than unfed ones, with corals in the 3600, 1800, 600 and 0 (control) nauplii/L groups exhibiting volumetric growth rates of 10.65±1.46, 4.69±0.9, 3.64±0.55 and 1.18±0.37 mm3/week, respectively. Corals supplied with the highest density of nauplii increased their ecological volume by more than 74 times their initial size, achieving a mean final volume of 248.38±33.44 mm3. The benefits of feeding were apparent even after transplantation to the reef. The corals in the 3600, 1800, 600 and 0 nauplii/L groups grew to final sizes of 4875±260 mm3, 2036±627 mm3, 1066±70 mm3 and 512±116 mm3, respectively. The fed corals had significantly higher survival rates than the unfed ones after transplantation (63%, 59%, 56% and 38% for the 3600, 1800, 600 and 0 nauplii/L treatments respectively). Additionally, cost-effectiveness analysis revealed that the costs per unit volumetric growth were drastically reduced with increasing feed densities. Corals fed with the highest density of nauplii were the most cost-effective (US$0.02/mm3), and were more than 12 times cheaper than the controls. This study demonstrated that nutrition enhancement can augment coral growth and post-transplantation survival, and is a biologically and economically viable option that can be used to supplement existing coral mariculture procedures and enhance reef restoration outcomes.