Reef Bowls have been around for a while, but they’re still considered to be unconventional and experimental. Brandon Mason started a 1 gallon reef jar in 2006, and Mary Arroyo’s 1.5 gallon Maritza vase just celebrated its 5th birthday. There has been some criticism of tiny reef picos with naysayers claiming they would always ultimately fail and are too difficult to keep clean. Sure, they’d be impossible if you treated them like a full sized reef tank, overstocking with fish and doing only monthly maintenance. All successful reef bowls have one thing in common: simplicity. Most use a simple air pump for filtration, a heater, and a small light. That’s it. Weekly water changes maintain water quality and replenish calcium and other elements. Wiping algae in a tiny tank every day is as easy as wiping the kitchen counter every day if you make it part of your routine.

I have maintained some really amazing reef tanks, but the minimalist in me is obsessed with this little reef bowl. Every coral in my reef bowl is the star of the show; there are no fillers. Everything is chosen with much thought and planning, placed with precision. It is the reefing version of the literary advice to “kill your darlings.” Pare down, edit, streamline your work. Give purpose to every stroke of your brush. 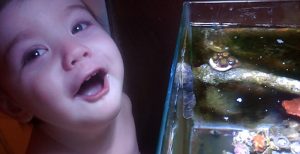 My journey into vase reefing began when my mom bought me a stunning antique pedestal foot vase a couple years ago. I planned on using it for dwarf seahorses, but at the time I had a 6 gallon cube with some corals and one hungry clingfish I let my toddler overfeed every day. The tank was overrun with algae. The corals were a few orphan frags I brought with me when I moved from another state, and I just never got around to setting up a better tank for them. One day in Spring 2016, it dawned on me that I should put my poor, sad corals in the vase. 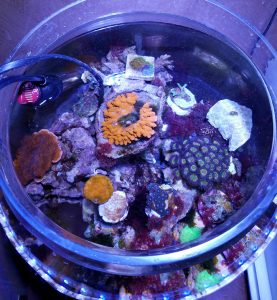 I moved some live rock and the corals from the 6 gallon into the vase. I put it on a rickety end table in my upstairs bathroom. We have a double sink in this bathroom, so I put the vase right next to the sink, which would become the vase’s own dedicated sink. The light was an ABI 12 watt 50/50 LED. Instead of an air pump, I used an old Koralia nano I had packed away for water movement. I hid the Koralia and a small heater behind a rock. I did weekly 90% water changes and topped off every few days with RO water. I had a few inverts like a blue tuxedo urchin, scarlet and blue leg hermits, an emerald crab, and a banded coral shrimp who enjoyed eating bristleworms. The corals thrived in this tiny bowl. I added some new corals, and they grew from tiny 4 polyp frags into small colonies.

This reef vase ran without a hitch until April 2017 when the top electrical outlets in the bathroom failed. My Koralia turned off, and I didn’t notice right away. At first I noticed my 1.5 year old urchin dead. In total, all of my inverts and one new coral perished. I did a full water change and found a power strip to plug my equipment into. If I’d had the powerhead plugged into a different outlet, my urchin would be alive today. The majority of the corals were fine, but I was crushed. “Urchin” was one of my son’s first words when he was almost a year old, and the urchin was a gift to him. Overall, it wasn’t a major disaster, but I hate losing any animals, even hermit crabs. 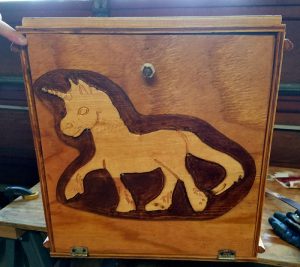 My step-dad, a hobby wood worker, built a new stand for my vase since my old end table was cracked down the center and very unstable. I wanted an oversized stand, so we decided to make it an 18” cube with a door on the front for storage. I asked for a simple box, but he got creative with it and carved a unicorn for the front, which is why we started referring to it as “the unicorn bowl.” When I brought the stand home, I realized my vase would be dwarfed by it and decided to upgrade to a new bowl. I also decided to move it to the kitchen with my other saltwater tank to make maintenance easier. I found an 8.5 gallon bowl that fit perfectly on the stand. I got some more live rock and moved the corals in mid April.

I upgraded the equipment in the new, bigger bowl. The new powerhead is 600 gph, and I bought the ABI Tuna blue LED, per Mary Arroyo’s suggestion. The color of the new Tuna Blue light took some getting used to, but it really makes the corals fluoresce. I still do weekly water changes, but I only replace about half the water. I have cautiously added some new hermit crabs, an emerald crab, and some peppermint shrimp to eat the Aiptasia that came with the new live rock I bought. The corals I brought with me from Connecticut are the M. danae, and M. setosa. I brought frags to my LFS Ricky Fin’s and he gave me frags back when I was ready for them. The other corals are all from his shop, except the Gorgonia my sister gave me from her tank. 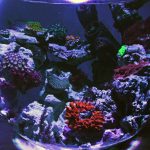 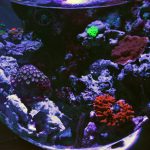 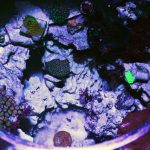 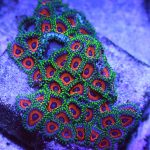 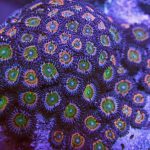 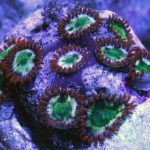 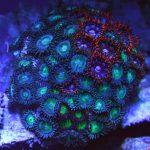 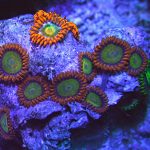 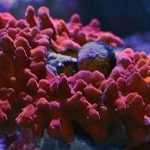 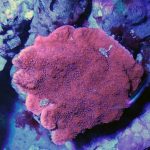 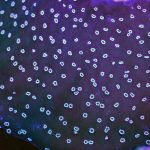 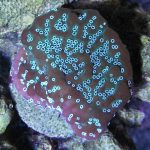 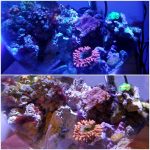 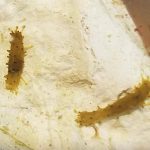 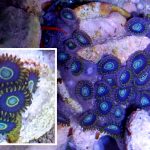 Blue Hornets – about 6 months of growth 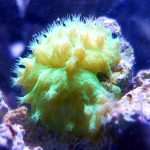 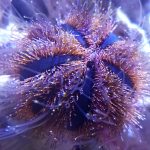 I’m very happy with the new bowl so far, even though I was disappointed I couldn’t find one with a pedestal foot. I have had issues with hair algae since overfeeding the tank the live rock came from, but more on that later. My Montiporas and Zoas needed this extra space, and the bowl is visually stunning with the extreme magnification of the curved glass. Once the corals grow in more, this bowl has the potential to be one of my favorite tanks ever.