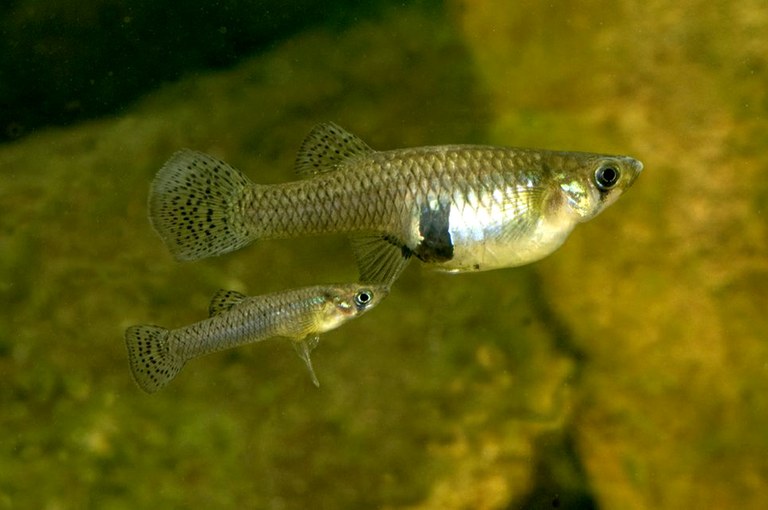 
Machos are only welcome when female mosquitofish are in a group

In some species, males invest virtually nothing in their offspring apart from sperm. So far, biologists believed that the most sexually active males in such species had an evolutionary advantage. But the ‘more mating, more offspring’ equation does not always hold in the case of the eastern mosquitofish (a small, livebearing freshwater fish) because the females also have a say, as behavioural researchers at Goethe University Frankfurt have now discovered.

“The starting point for our studies was the question why males in some animal species differ pronouncedly and consistently in their sexual activity levels even when they are exposed to identical environmental conditions and don’t need to compete”, explains Carolin Sommer-Trembo, who is dealing with the topic in her doctoral thesis. “We wanted to know how this variation in male behavioural types is maintained, although selection ought to oust males which display low or average levels of sexual activity.”

She chose the small and inconspicuous mosquitofish (Gambusia holbrooki) as a study object because they have sex and give birth to live offspring. Males have a penis-like mating organ on their underside which is long in comparison to their overall body size. To copulate, they swim up to the female from underneath in order to remain undiscovered for as long as possible.

To find out which males are interesting for female mosquitofish and whether the level of male sexual activity plays any role at all in their choice of partner, Carolin Sommer-Trembo and her colleagues Dr. David Bierbach (Leibniz Institute of Freshwater Ecology and Inland Fisheries, Berlin) and Professor Martin Plath (Northwest A&F University, Yangling) let females choose between males which displayed different levels of sexual activity. To exclude the possibility that specific males were chosen because of their appearance (morphology) or other behavioural characteristics and to control precisely the degree of sexual activity of the males, the researchers worked with computer-animated stimulus males which were presented to the females on monitors.

The result was that females preferred males which displayed a moderate level of sexual activity whilst they clearly avoided males with a greater sex drive. The researchers assume that this is due to cost-benefit considerations, since females who find themselves in the close vicinity of sexually very active males often not only suffer injuries to their genitalia but also scarcely have an opportunity to feed as they are constantly busy avoiding the males’ advances.

The situation is different when a group of females encounters a rampant male determined to mate. “Under natural conditions, female mosquitofish often form shoals to protect themselves from male harassment, just like other fish do to protect themselves from predators”, explains Carolin Sommer-Trembo. In the group, females showed far greater acceptance towards sexually very active males, since the cost-benefit ratio shifts under these circumstances.

The dependency of female choice on social context could explain why variation in male behavioural types is maintained amongst mosquitofish. And the experiments show that females include male sexual activity as a criterion in their choice of partner.

By the way: That swimming away from tempestuous lovers is a good idea when out on your own as a female mosquitofish does not appear to be instinctive but based on experience. When Sommer-Trembo conducted additional tests with virgin females, they were equally open to all types of male.

[via Goethe Universitat Frankfurt am Main]