Fighting Fire with Fire: Saving Corals from Bacteria with Bacteria 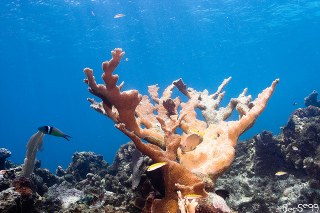 
In August of 2011, researchers confirmed a bacterium from human excrement, Serratia marcescens, is responsible for White Pox Disease that has devastated Elkhorn Coral (Acropora palmata).  Now new research from the University of Florida believes we may be able to employ beneficial bacteria to combat their virulent cousins.

Robert Wells of the University of Florida shares his news article with Advanced Aquarist.

GAINESVILLE, Fla. — Bacteria that could potentially help corals resist the devastating disease white pox have been found by researchers at the University of Florida and Mote Marine Laboratory.

The findings could help maintain the health of Florida’s coral reefs, which bring in billions of dollars to the state annually and are important for tourism, fisheries, shoreline protection and pharmaceutical research.

“Coral reefs are a major attraction for tourists in Florida,” said Max Teplitski, a microbiologist and an associate professor at UF’s Institute of Food and Agricultural Sciences. “They support the economies of South Florida, and they’re also important for fisheries and, in general, healthy ecosystems.”

“Unfortunately, in the past 20 years, corals have been degrading due to global environmental changes and direct human impacts, like overfishing and other pressures,” he said. “And also, diseases have been wiping out stressed corals in South Florida.”

White pox is caused by Serratia marcescens, a bacterium that commonly occurs in feces of animals and is capable of attacking a variety of animals and plants.

To combat white pox, Teplitski and a team of researchers began studying the interactions between the pathogen that causes the malady and other microorganisms that live on corals.

Their findings are detailed in a study Teplitski co-authored in this month’s issue of The ISME Journal: Multidisciplinary Journal of Microbial Ecology.

Corals are ancient creatures that recruit microorganisms such as bacteria to protect themselves from disease. Their characteristic structure is built by animals known as polyps.

In the study, the researchers screened several hundred bacteria isolated from coral and non-coral polyps for the ability to help ward off white pox.

The researchers found four bacteria that stopped white pox disease progression under controlled laboratory conditions and, to some degree, protected the polyps from getting sick.

They also noted that polyps containing the bacteria survived white pox infection, whereas those without the bacteria died.

Based on these results, scientists may begin checking individual polyps for the presence of beneficial bacteria before introducing them into a reef system as part of coral reef restoration.

Kim Ritchie, senior scientist and manager for the marine microbiology program at Mote Marine Laboratory in Sarasota, said Florida’s coral reefs are some of the sickest in the world.

“They seem to be in the worst shape,” said Ritchie, a co-author of the study. “But the more we can learn about the balance of beneficial bacteria and pathogenic bacteria, the easier it will be to help the coral reefs in the Keys become healthier.”

The research was funded by sales of Protect Our Reefs specialty license plates, a statewide program administered by Mote Marine Laboratory Inc.

Study authors also include Ali Alagely, a former UF undergraduate student, and Cory Krediet, a doctoral student in the interdisciplinary ecology program at UF’s School of Natural Resources and Environment.