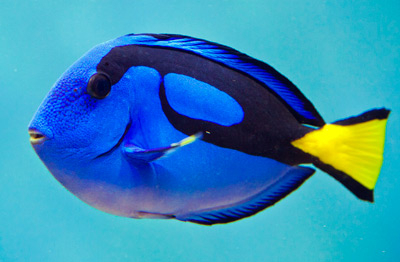 Paracanthurus hepatus, Pacific blue tang, widely known as DoryWell, the word is out that Finding Dory, the long-anticipated sequel to Disney/Pixar’s Finding Nemo, is finally slated for release in June of 2016. If the impact of the sequel is anything like that of the original—a lot of youngsters clamoring to keep the film’s “star” as a pet—then I suspect that beginning next summer, the Pacific blue tang (Paracanthurus hepatus), the species that Dory represents, will be very popular indeed. I have to admit I’m conflicted about the pending release of this film. On the one hand, if Finding Dory holds up to the quality of the original in terms of animation and entertainment value, it will be well worth viewing. Jaded as I am by decades in the hobby and having spent plenty of time on real coral reefs thanks to the miracle of scuba, I still find the visually lavish representation of the ocean realm in Finding Nemo quite compelling. Plus, anything that sparks kids’ interest in marine life has to be a good thing, right?On the other hand, a burgeoning interest among youngsters in keeping P. hepatus in a home aquarium probably doesn’t bode well for the species MORE