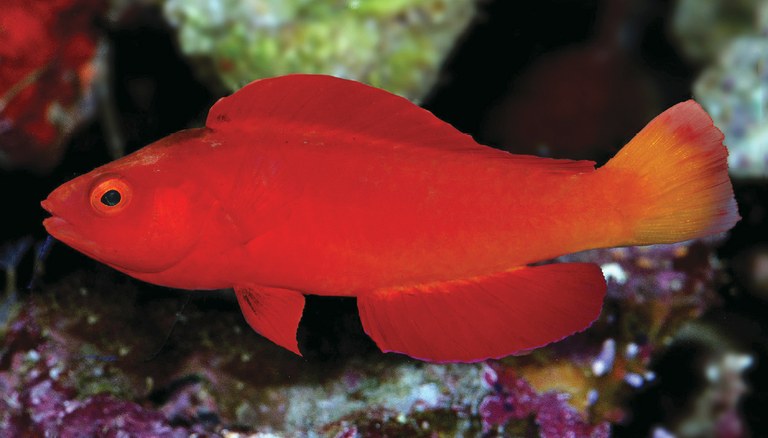 Cirrhilabrus shutmani sp nov. Photo by Barnett Shutman (the person for whom the fish is named)

The new fairy wrasse is placed in the same complex as some other notable, rare, deep-water species: C. blatteus, C. claire, C. earlei, C. jordani, C. lanceolatus, C. roseafascia, C. rubrisquamis and C. sanguineus.  But unlike the other species in this complex, C. shutmani is completely devoid of any stripes of spots.  It is, quite simply, a very red fish.  And at the depth it’s collected where red is as good as black, you can understand why this fish has evaded human observation for so long.

Etymology. Named in honour of Barnett Paul Shutman, who first provided photos as well as the type
specimens of the new species (via Aquarium Iwarna, Singapore). The common name, magma fairy wrasse, alludes to its live colouration, as well as the type location of Didicas Volcano, an active volcano part of the “Pacific Ring of Fire” at the southern end of the Luzon Volcanic Arc.

The new fiery species is described in ZooTaxa.

Also of interest is a possible new species from Ogasawara Islands (below) that the researchers have yet to describe.  It’s quite a beauty, too, bearing resemblance to cross between C. claire and C. lanceolatus (at least to my untrained eye).