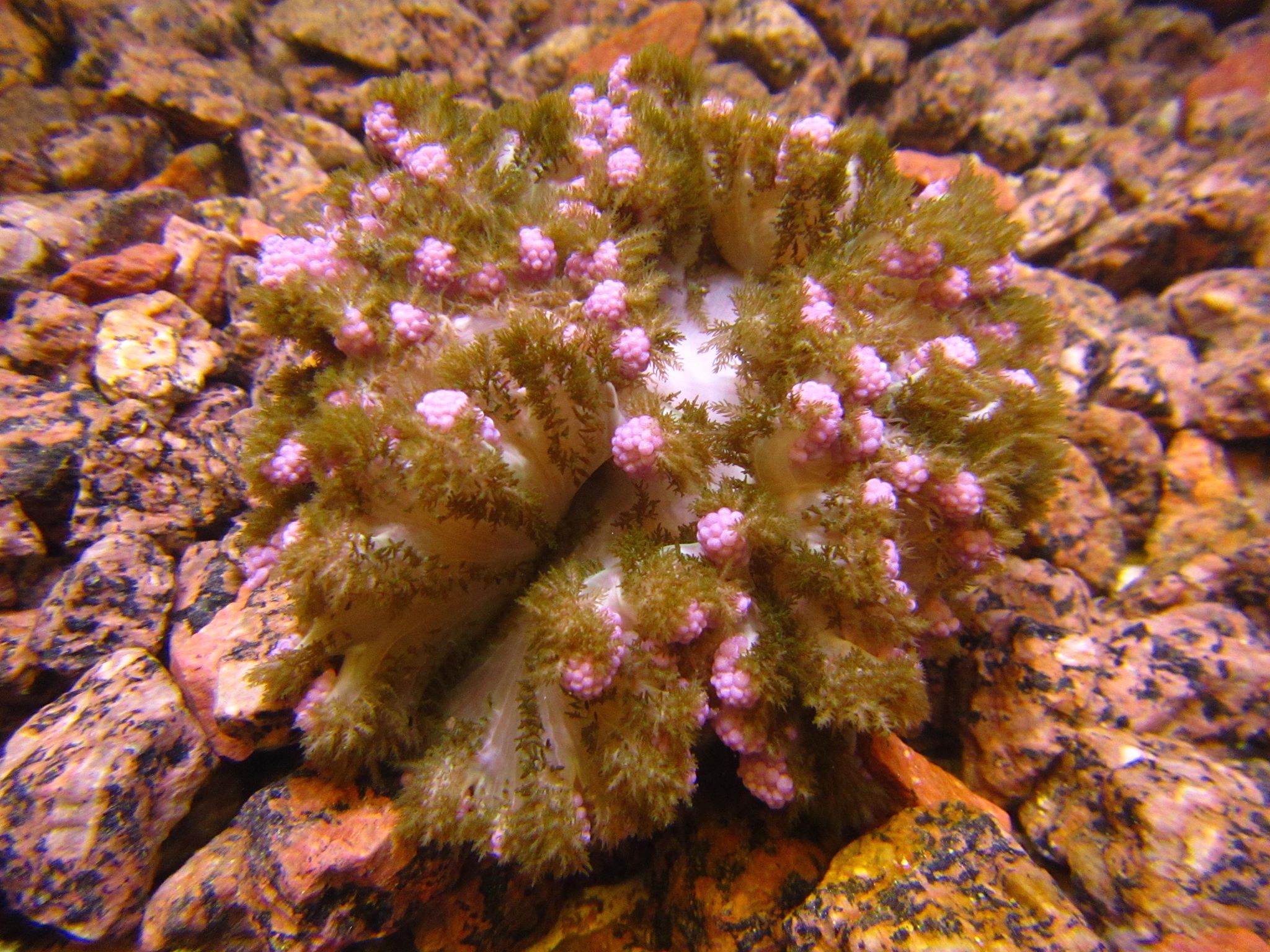 [EDIT: This article originally identified this specimen as T. dendrophora. That was likely incorrect. After reviewing the literature for this genus a second time, it seems more probable that this is Thalassianthus hypnoides, a species which was described in 1893 by William Saville-Kent from the Great Barrier Reef and which has rarely been reported since. His description and illustration are a perfect match for this specimen. In particular, T. hypnoides is mentioned as having feathery, mosslike tentacles that become more abundant around the edge of the polyp. Nematospheres are in large groups and solidly purple. Specimens identifiable as T. villosa (a probable senior synonym of T. dendrophora) look similar to T. hemprichii, but with barb-like (vs bushy) oral disk tentacles. White and green color forms exist, and they appear to mimic soft corals like Sansibia and Briareum]

The unusual specimen seen here was collected from the shallow, rocky waters near Darwin Australia, and, while it might not be the most visually impressive anemone to ever enter the aquarium trade, it is undeniably one of the rarest. This is most likely Thalassianthus dendrophora, which has until now been known from just a single specimen collected in the nearby Torres Strait of Australia more than a century ago.

This new sighting comes courtesy of Monsoon Aquatics, who collected it from the same habitat as the Xenia Mimic Anemone. Both clearly belong to the genus Thalassianthus, owing to the prominent nematospheres present on the oral disk, but the two are clearly quite different. In T. aster, the oral disk is flat and circular, the tentacles are much thicker, and the coloration is considerably different (i.e. it looks like Xenia).

We can also easily eliminate from consideration T. hemprichii, the only member of this genus common in aquarium exports, as that species has the oral disk densely covered in tentacles, giving it a strong resemblance to a carpet anemone. Incidentally, Stichodactyla is now thought to be the closest relative of Thalassianthus, and it’s likely they, along with the Pizza Anemone (Cryptodendrum), will eventually be joined into the same family at some point. All of these genera share the unusual trait of having tentacles spread throughout the oral disk (compared to most other anemones (e.g. Exaiptasia, Phymanthus) which have these limited to the margin). 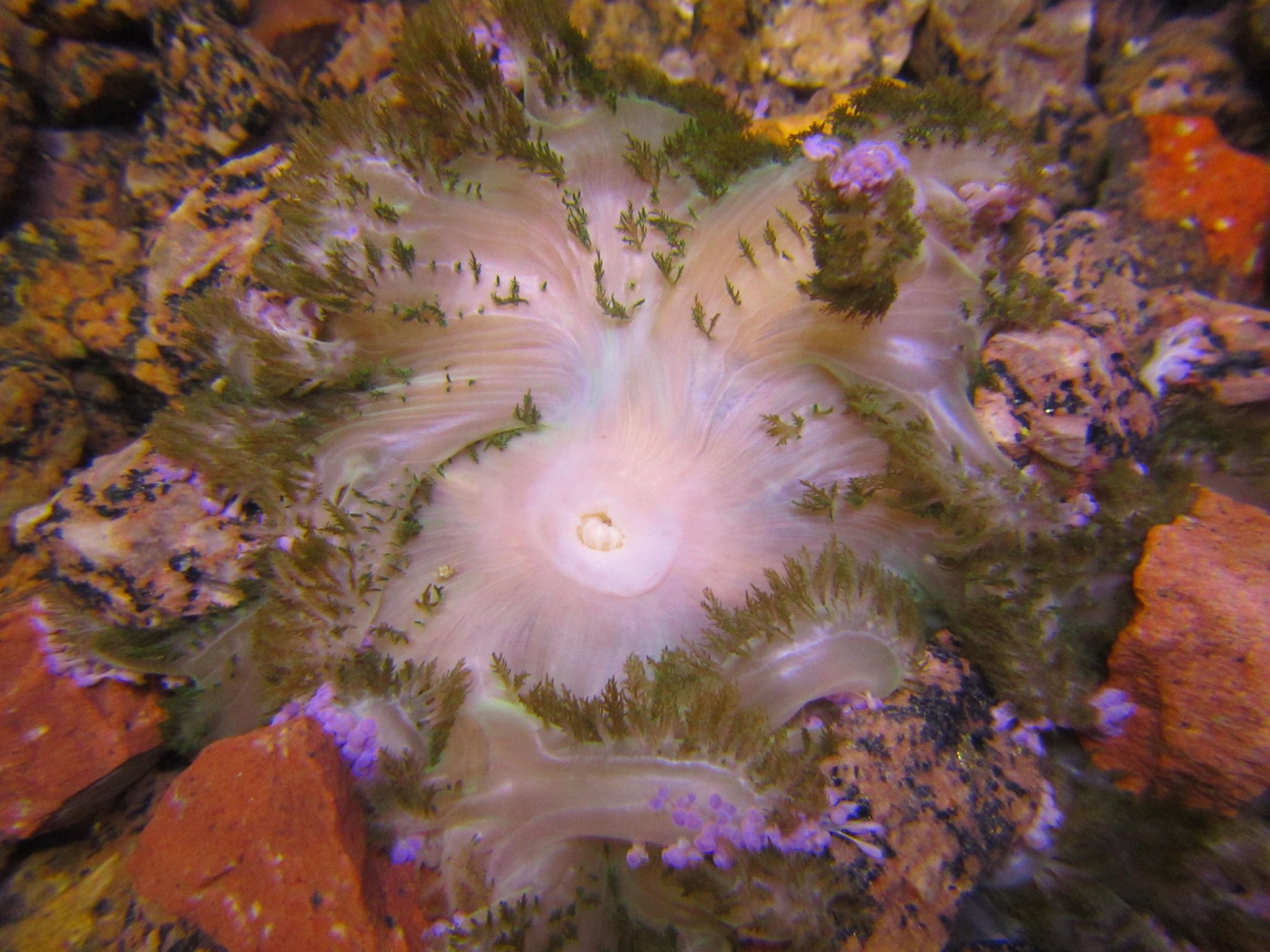 Note the deep, impermanent folds of the oral disk, and the limited distribution of the tentacles. Credit: Cameron Bee / Monsoon Aquatics

We can now narrow our choices to two options: T. dendrophora and T. villosa. Both are known only from the original type specimens, the latter of these having been described in 1833 from Tonga. And both of these taxa share a highly similar morphology, based on the little that we know about them. The key traits to look for are the highly undulated margin of the oral disk and the limited distribution of the tentacles, mostly to the margins and sparsely radiating towards the center. Both are clearly visible in these photographs.

Morphologically, the only differences noted in the recent revision of this genus relate to the number of tantacular lobes and the overall size of the organism. The tentacular lobes are finger-like extensions of the oral disk, each of which possesses several plumose tentacles. There are somewhere around 300-400 estimated for T. dendrophora, while T. villosa has fewer than 200. Coinciding with this, the one known specimen of T. dendrophora is nearly twice the size of T. villosa, 120mm vs. 65mm oral disk diameter. This type specimen appears to be process of asexually dividing itself, which has led to the hypothesis that the villosa phenotype is really nothing more than a juvenile of the dendrophora phenotype, in which case, the correct name for this organism would have to be the older T. villosa. 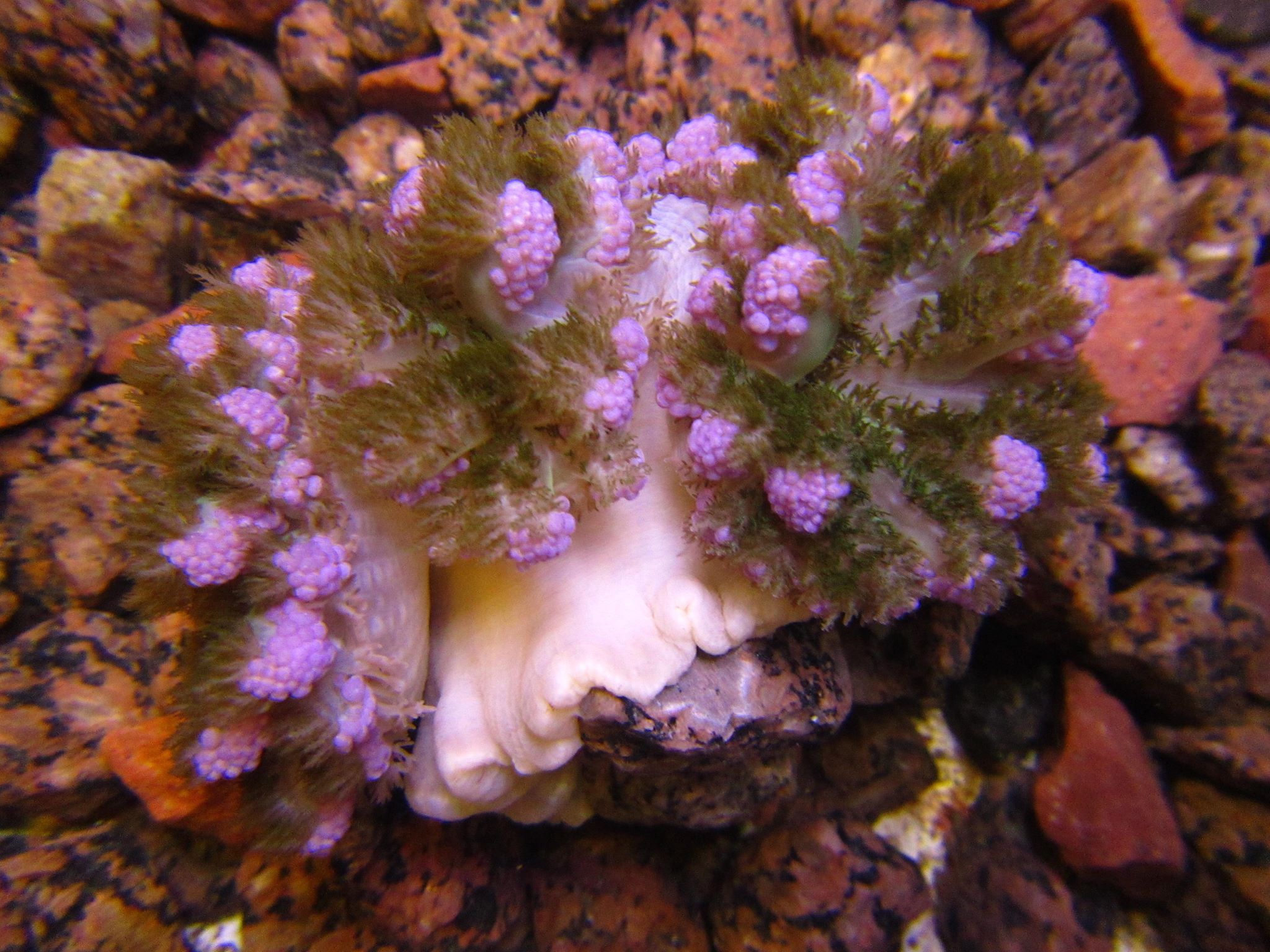 Like grapes ready to be harvested from the vine, the lavender nematospheres of this specimen are a dazzling sight. Credit: Cameron Bee / Monsoon Aquatics

There is a potential color difference noted in the original descriptions of the live organisms. For T. dendrophora, the nematospheres are said to vary from yellow to pink, while those of T. villosa are recorded only as being yellow. However, both taxa are described as having the tentacles either white or concolorous with the oral disk, not the contrasting green we see here. Another possible example of this anemone was recently posted to WetWebMedia and shows an even more remarkable coloration, with pink nematospheres and tentacles that display a vibrant mix of light and dark greens, accented by orange.

With so few records, it’s difficult to know what to make of the situation. Are there multiple species here that happen to share a similar morphology, or is this just a single anemone which is highly adaptive to its surroundings? Alas, there aren’t nearly enough observations to know with any certainty. Quite far from it, actually, which illustrates just how important and exciting this new record is. If you happen to cross paths with an anemone that looks anything like these undulating Thalassianthus, be sure to snap a photograph. 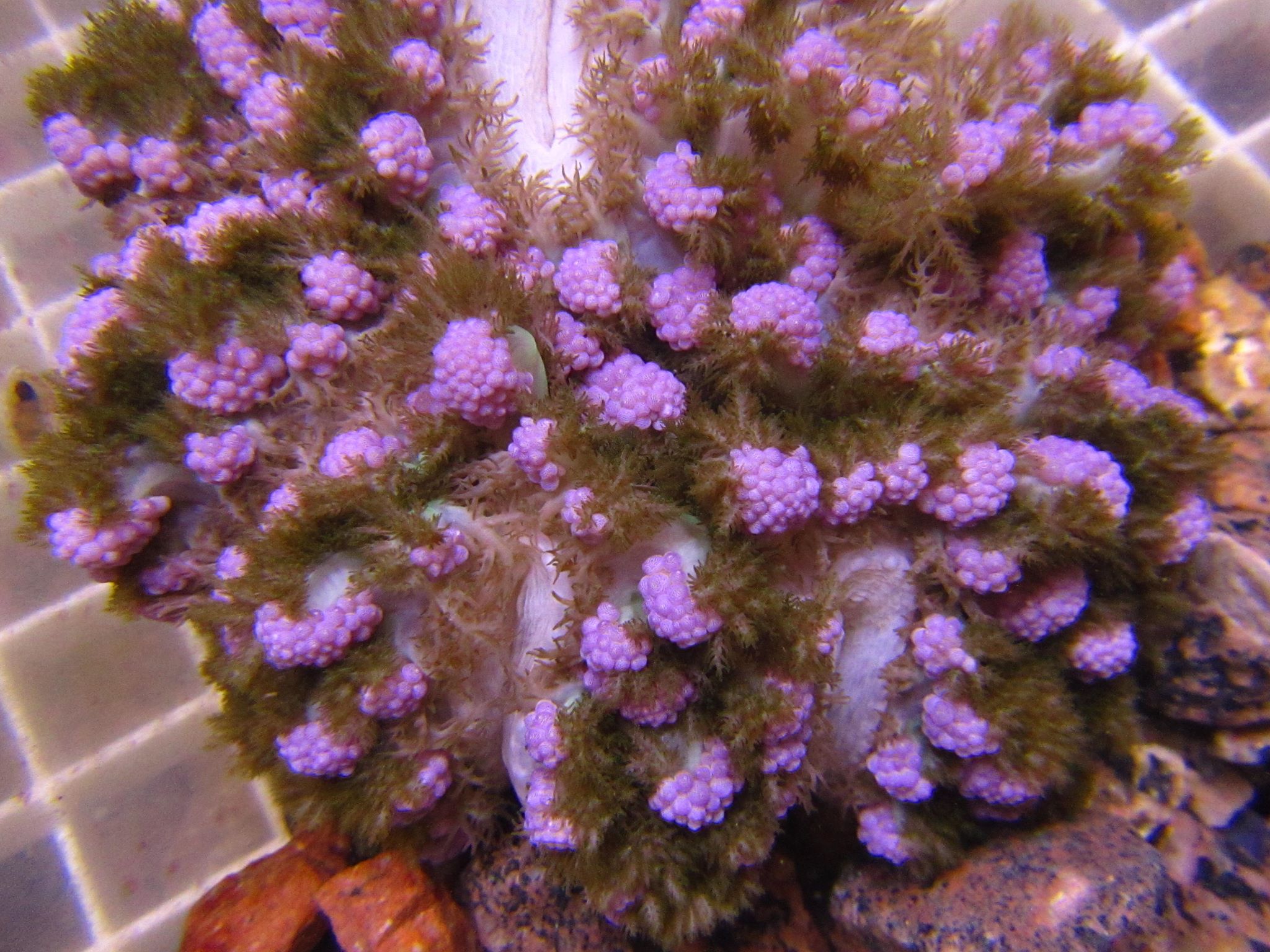 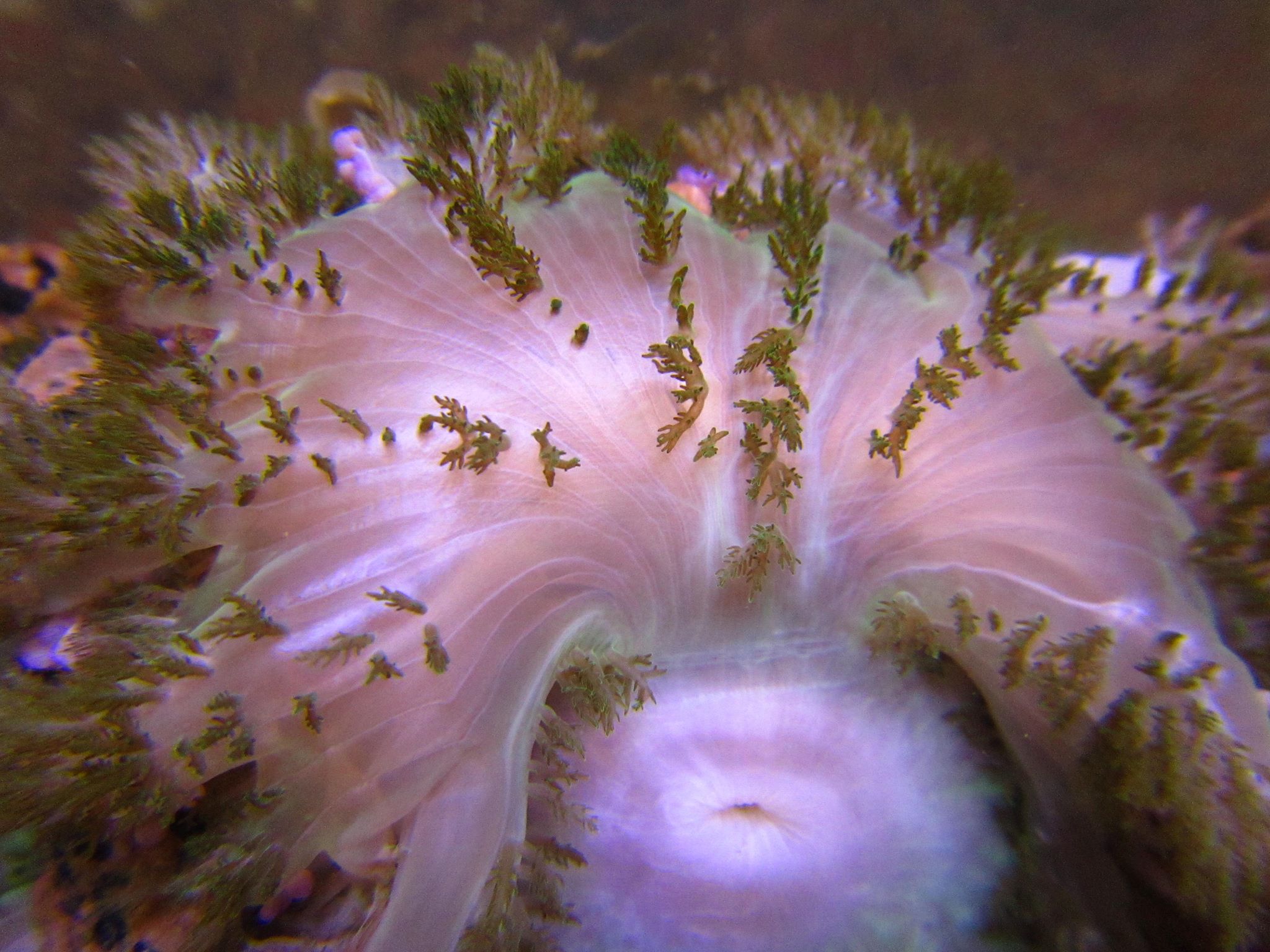