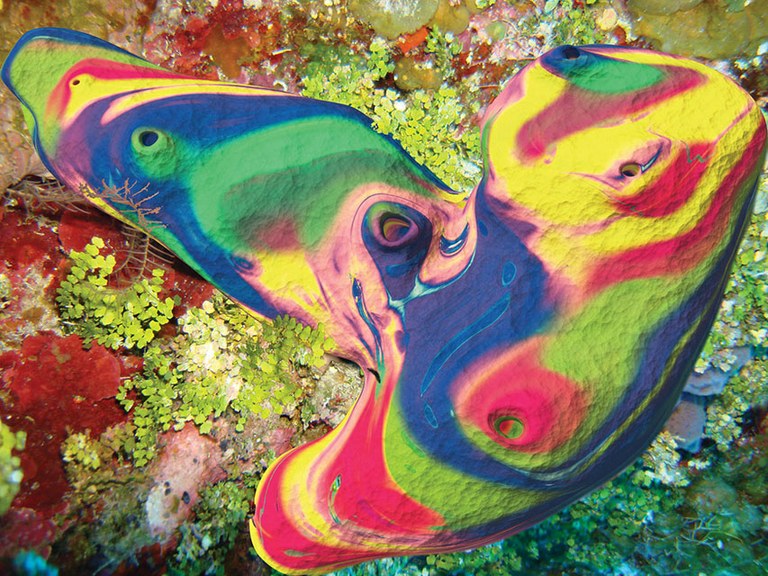 Illustration by Santtu Mustonen. Background photo courtesy of the NOAA.


The sponge’s name is Smenospongia aurea. It ranges from a tan to green coloration and oftentimes grows in massive colonies with oscular mounds or openings where water passes through the sponge’s structure.

The compound in question is 5-Bromo-DMT and is a brominated indole alkaloid found in select marine sponges, including S. aurea. 5-Br-DMT is similar in structure to dimethyltryptamine (DMT), which is known as a psychedelic drug that can produce mild “trippy” experiences to experiences were reality is completely suspended.

“Dr. Osculus” actually self-medicated himself with the compound so as to ascertain its efficacy, which is caused some ridicule in his laboratory as the normal protocol is to test psychedelic compounds on rats instead. He tried both smoking it and direct ingestion of the compound in various dosages and recorded his experiences:

… (with 40 mg, smoked) I closed my eyes and found myself drifting through the ocean on an ice floe shaped like a puzzle piece. There is a silkennig of my own (somewhat bristly) hair, and am thereish but not quite there. Very light and nonaggressive, nonnauseating. Drugs such as this are aptly described as ‘serenic.”

One other thing is he didn’t actually isolate the compound from S. aureus, even though the sponge contains the compound. Instead, he used other compounds from the sponge as a template and instead synthesized 5-Br-DMT in the lab.  His reasoning was the extraction process was too intensive and economically unfeasible.

(via The Scuttlefish and Vice)