This has been an exciting week for wrasse aficionados, as the long-awaited revision of the flasherwrasse genus Paracheilinus has finally appeared, along with three newly described species. Two of these (P. paineorum & P. xanthocirritus) are merely regional color variations of the familiar aquarium species P. filamentosus, the Filamented Flasherwrasse, which have now rightfully been recognized as distinct. However, the other new fish, P. alfiani, is a rather unexpected find with many questions surrounding it. Fortunately, despite its apparent rarity in the wild, it has been well-documented in photographs and, for the first time, in a stunning new video from the reefs of Indonesia. 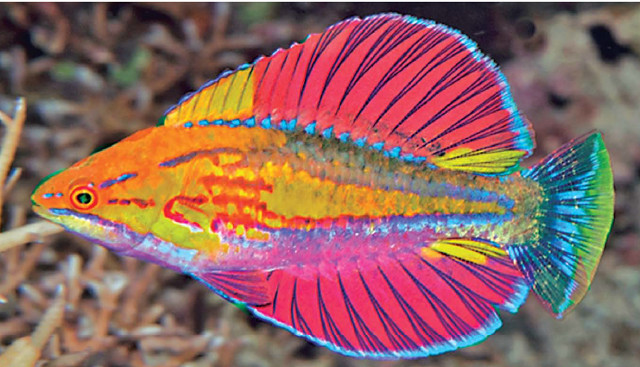 Alfian’s Flasherwrasse is unusual in the genus for its lack of filaments on the dorsal fin, a trait shared most obviously with its reputed sister species, P. rennyae. This latter species is unfamiliar to most aquarists, having only recently been described and still uncollected for the hobby. Renny’s Flasherwrasse is currently known exclusively from Komodo and Flores, while just to the east is where we find the type locality of P. alfiani at Lembata Island, as well as another likely specimen documented at Alor, though, presumably, it ranges further east into the Banda Arc. 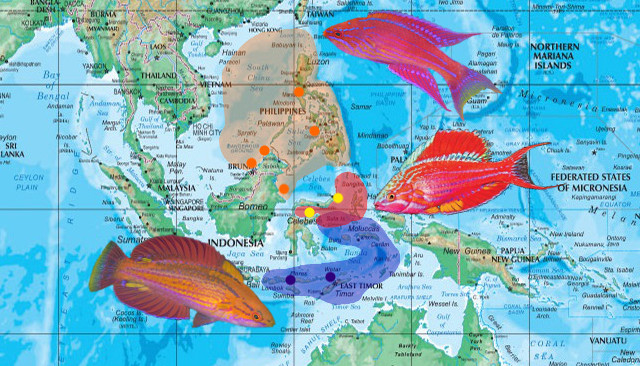 P. rennyae, togeanensis & angulatus are presumed to form a single clade based on similarities of fin shape, genetics and biogeography. How does “P. alfiani” fit into this?

The great peculiarity here is why these two nearly identical species should occupy such a fragmentary distribution in this region when other fish groups present in the Lesser Sunda Islands and Banda Arc display homogenous populations. Related wrasses in Paracheilinus and Cirrhilabrus are never speciated in this way, nor are hyperendemic groups like the Trimma gobies or Ecsenius blennies. The closest analogy is perhaps seen in the Cirrhilabrus aurantidorsalis clade of fairy wrasses, which show an essentially identical distribution centered on Central Indonesia as that seen in the presumed clade of P. alfiani, P. rennyae and P. togeanensis. 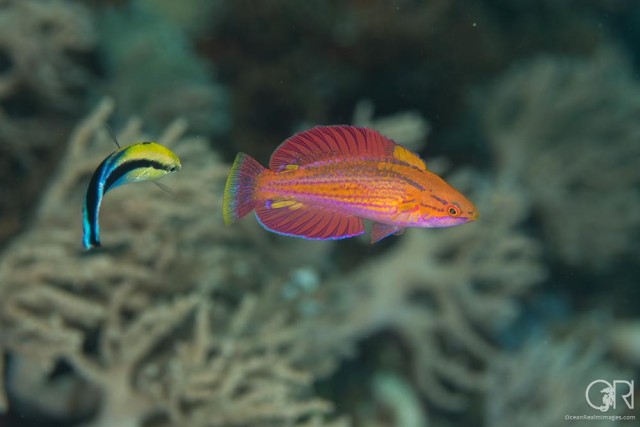 In my upcoming review of this genus, I’ll be documenting the stunning abundance of naturally occurring hybrids in the Coral Triangle. Flasherwrasses often swim in mixed-species schools comprised of many individuals, which creates a mechanism through which hybridization is encouraged. When we examine the video of P. alfiani, we can see it alongside a far greater abundance of P. paineorum, a species which has a similarly colored anterior dorsal fin. 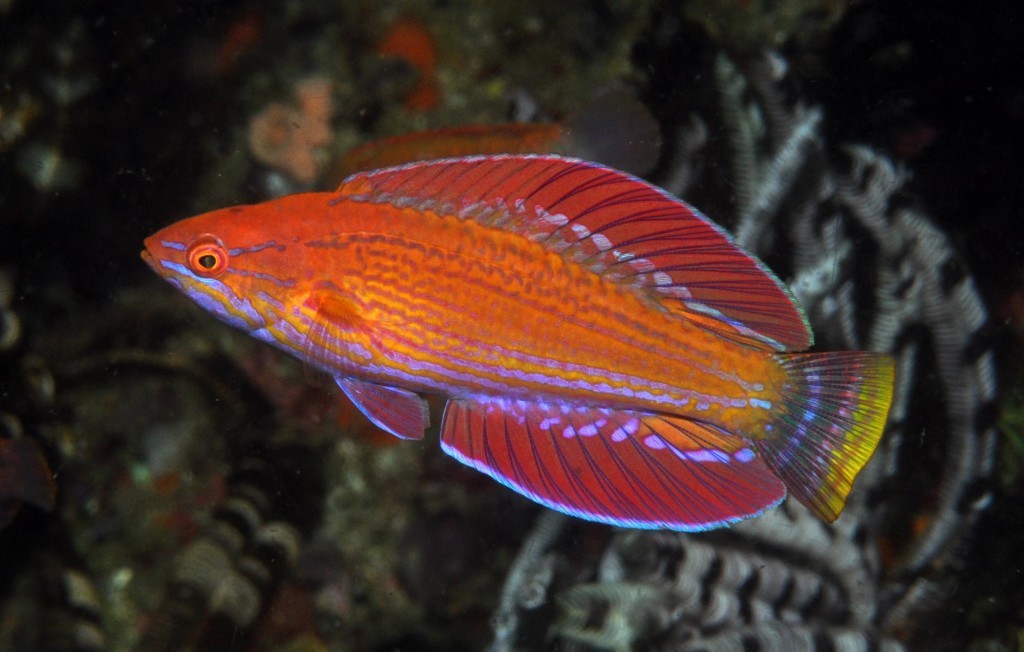 The description of P. alfiani (from just two male specimens) makes mention of minimal differences between it and P. rennyae. The most prominent is the greater expanse of yellow-orange in the anterior dorsal fin, reaching the 6th spine rather than the 2nd. There is also mention of the caudal fin being blue basally and absent the rows of blue spots (though this is argued against by the above image taken in Alor). Lastly, the authors discuss a perceived difference in the patterning of the fine lines along the side of the body (being more numerous in rennyae), though, in examining the images shown here, there does not seem to be any consistent difference between them, just variation from specimen to specimen. 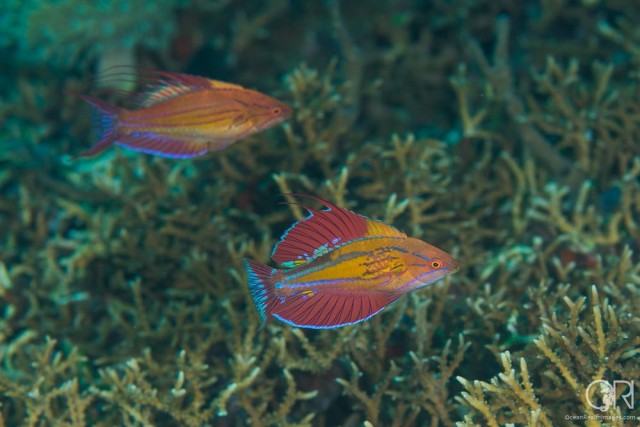 A P. alfiani X paineorum hybrid. Note the differences in the caudal fin shape between this specimen and a pure P. alfiani. Credit: Richard Smith/Oceanrealmimages.com

To summarize, the only reliable diagnostic trait separating P. alfiani and P. rennyae appears to relate to the amount of orange in the dorsal fin. In the photo above, taken at Alor, we see a very obvious alfiani X paineorum hybrid beside a pure P. paineorum. Given this clear hybridization, it is quite reasonable to chalk the minimal differences in fin coloration up to genetic introgression from these mixed species matings. 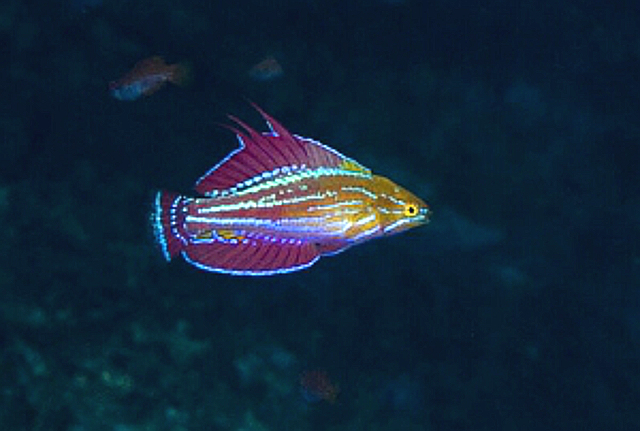 Another hybrid showing an intermediate amount of yellow in the dorsal fin, from Komodo. Photographed in proximity to P. rennyae. Credit: Diverhiro

The real question then is whether P. alfiani is a legitimate species or if it is merely an example of a P. rennyae X P. paineorum hybrid. Remember that hybrids are often phenotypically variable due to the genetic recombination that takes place when backcrossing with a parent species or mating with a fellow hybrid. It’s therefore conceivable that the “alfiani” phenotype could be representative of a F1 crossing of the parent species, while the filamented specimens from Alor and Komodo could represent an F2 backcross with paineorum. 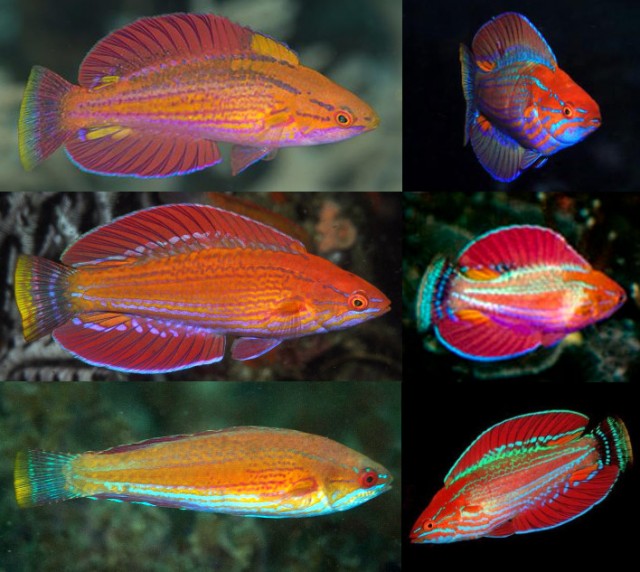 With so little data and so few sightings to work from, we ultimately have to ask ourselves what is most likely here. To date, P. alfiani has only been seen in two locations, in low numbers, and in the presence of a species it is known to form hybrids with. Without further study, I would posit that it is highly premature to recognize this phenotype as a distinct “species” when such strong evidence exists from its morphology, genetics, behavior and biogeography (not to mention the overwhelming prevalence of hybridization in Paracheilinus) suggesting that it is merely a hybrid.