First Video of the Pearly Signalfish

Signalfishes (Pteropsaron spp.) are a poorly known group of small, benthic fishes found in deep sandy habitats adjacent to coral reefs. While they have yet to be collected for aquarists, their attractive colors and interesting behaviors suggest that these would make for fascinating captive subjects. Now, a short video taken in the Philippines adds a bit more detail to our understanding of their intriguing social interactions. 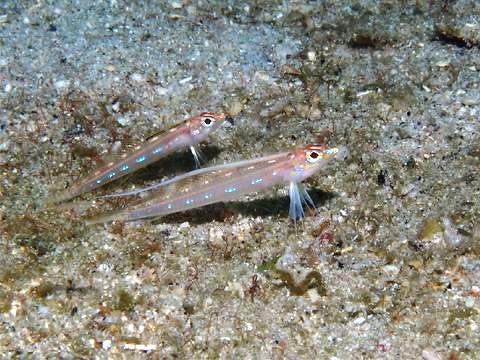 The species most likely to be targeted by aquarium collectors is the Pearly Signalfish Pteropsaron springeri, as this fish can be found in major collection hotspots of the Coral Triangle and at a shallower depth (10+ meters) than others in the genus. Documented specimens appear to form loosely organized groups along the substrate, with a single male patrolling a discrete territory. Based on the video below of sparring male Pteropsaron formosensis, it would seem that males use their highly specialized dorsal fins to intimidate each other.

Adding to the mystery surrounding these fishes is the video of P. springeri shown at the beginning of this post. The specimen is clearly a female, as judged by the short black dorsal fin being flicked about—males have a far more elongated white fin. This raises the question of what role the female fin flicks serve. Does this perhaps signal to the male a desire to mate… is it used to communicate instead with the other nearby females… could it possibly be a defensive behavior of some sort? 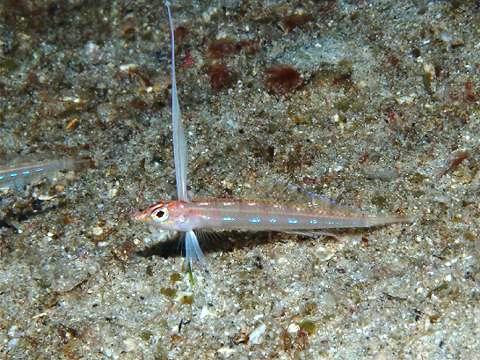 A male Pteropsaron springeri displaying its spectacular dorsal fin. Compare this to the short black fin of females. Credit: mdx2

Aquarium specimens could go a long way towards answering the many questions which surround these fishes, but, seeing as they aren’t commonly encountered in reef habitats, it will take a dedicated effort on the part of collectors to make this happen. For more information, check out my recent review of Pteropsaron here.