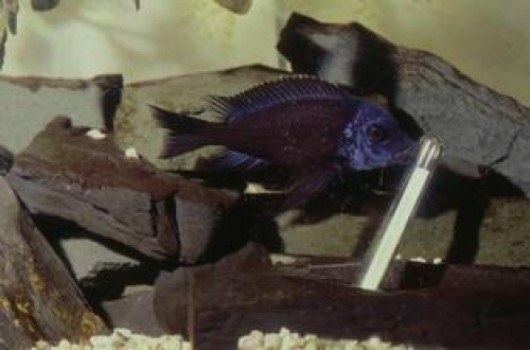 A cichlid fish strikes a bottom-weighted thermometer that would immediately right itself. It was often struck repeatedly in bouts. Photo by Ann Hawthorne


From the University of Tennessee:

Fish just want to have fun, according to a UT study that finds even fish “play.”

The research is published in the academic journal Ethology and can be viewed at the journal’s website.

Gordon Burghardt, a professor in the departments of Psychology and Ecology are Evolutionary Biology, is known for defining “play” in a way that allows us to identify it in species not previously thought capable of play, such as wasps, reptiles and invertebrates.

“Play is repeated behavior that is incompletely functional in the context or at the age in which it is performed and is initiated voluntarily when the animal or person is in a relaxed or low-stress setting,” said Burghardt.

He and his colleagues Vladimir Dinets, a psychology research assistant professor, and James Murphy of the Smithsonian National Zoological Park in Washington, DC, are the first to document play with objects in a cichlid fish species. There are hundreds of species of cichlid, including tilapia, but the behavior of the species they studied appears unique.

The team studied and filmed three male fish individually over the course of two years. They observed the fish repeatedly striking a bottom-weighted thermometer. The presence or absence of food, or other fish within the aquarium or visible in an adjacent aquarium, had no effect on their behavior. The thermometer-attacking behavior satisfies Burghardt’s criteria for play.

“The quick righting response seemed the primary stimulus factor that maintained the behavior,” said Burghardt. “We have observed octopus doing this with balls by pulling them underwater and watching them pop back up again. This reactive feature is common in toys used for children and companion animals.”

According to Burghardt, by more accurately characterizing play and observing it throughout the entire animal kingdom, humans may better understand themselves. His research illustrates how play is embedded in species’ biology, including in the brain. Play, like much of animals’ psychology including emotions, motivations, perceptions and intellect, is part of their evolutionary history and not just random, meaningless behavior.

“Play is an integral part of life and may make a life worth living,” said Burghardt.

Burghardt is the speaker at the October 25 Pregame Showcase held two hours before kickoff at the Carolyn P. Brown University Center Ballroom (Room 213). His book, The Genesis of Animal Play—Testing the Limits sums up many of his findings. More about the book can be found at the publisher’s website.